Today, it is raining outside. Lounging around at home, remembering all the recent photographs that I have seen, some common mistakes come to my mind. Are you committing any of these common composition mistakes? If you are, then these are the things that are preventing your photographs from becoming great. Learn about these mistakes and avoid them in your future compositions.

(A hilly landscape in monsoons)

Mistake 1 – Too Small A Subject!

Very often I have come across images that have a superb subject but usually this subject gets lost in the overall composition.  The problem here is what a photographer sees in front and not what is seen through the viewfinder. Whenever there is an interesting scene unfolding in front of us, we tend to get lost in it. The eyes focus on that and we don’t see the surroundings. The same thing happens when there’s a camera in hand. The same scene or the subject which impresses us gets seen through the viewfinder. The focus remains on the main subject. What gets forgotten is the excessive area around the subject in the frame. This makes the subject too small. There’s a simple way to avoid this mistake – go close. One of the photographers has said that if your photograph is not strong enough then you are not close enough.

Observe the subject in context of the complete frame and then press the shutter release button. Sure, cropping (Cropping Tool) can be done later on but why do it at all if you can manage it initially. Go close, use a longer focal length, move towards the subject and make it appear large. Fill the frame!

Mistake 2 – Too Many Unnecessary Elements

This is similar to the first mistake but with a slightly more impact. Here the subject is lost in the frame not just beacuse of the size but also due to many other elements getting included in the composition which do not add anything to it, except distraction.

Many decades back, a famous photographer has said –  anything that doesn’t add to a photograph takes something away from it. I have used this quote many times and still I feel the need to repeat it!

Try to keep your compositions simple. The main element should stand out and anything that you include in the composition should be there for a reason. It should be a part of the composition and not just there because it happened to be there.

(Though the bird is sitting on an apple and seems to be enjoying it, the cluttered foreground and background creates tension in the overall composition. In contrast, the photograph below focuses just on the bird)

(Without the distracting foreground and the background, the bird stands out. For the birding enthusiasts, I am leaving it up to you to identify this as a ‘Streaked Laughingthrush’ or a ‘Striated Babbler’

This is the age of autofocus. It has been so for past many decades, and yet people err with this luxury. Quite commonly, I have seen photographs where the something adjoining the subject is in focus and not the main subject. I have seen portraits where ears were in focus and eyes were slightly off. Similarly in birds, I have seen accomplished birders ending up with sharp tail and a blurred head. I recommend shifting to back-button autofocus if your camera permits it and press the shutter release only and only when you are sure of your composition and focus.

Two common technical errors also interfere with this. Sometimes accidentally, you might knock off the auto-focus lever and turn it towards manual. This happened with me also once. I was out birding with a friend of mine at Natadol. Initially I thought that my diopter setting was off (Dipoter Correction of Camera), later I thought it was a dirty viewfinder and then after two shots did I realize that my autofocus was not working! The other technical mistake that happens is when the auto-focus mode is switched to continuous or tracking AF mode. The moment you change the framing, the focus changes. Do a quick check of these two points if your images have the main subject blurred.

If the whole of the frame is blurred, the simplest explanation is camera movement. Raise the shutter speed, use a support, use image stabilization or VR or raise the ISO. Do whatever it takes but don’t click photographs that show hand shake. In fact, a noisy photograph (from excessively high ISO) is also better than a blurred photograph.

Placing the subject dead center is usually frowned upon by many photographers. They have come up with the Rule of Thirds (Composition Rules – Part I), Fibonacci Spiral or the Golden Ratio (Fibonacci Spiral and Photography) and various other aids. To some extent I agree with these. The subject should be in a way that it creates interest in the composition. The various parts should balance out in the frame and so should the negative space (Negative Space). Remember, I am one of those who considers there rules a big flaw in my heart but I still tell them to the people around me. It is upto you to decide whether to use these rules or not.

My advice is – try placing the subject in various locations in the frame initially. Choose the one that is most powerful placement. With time, you will start doing it subconsciously.

Another small trick that helps in getting good at subject placement is – use a prime lens for a few months! It will improve over-all visualization (Learning to Visualize) and also the way you place various elements in your composition.

(A tight composition without following any rules. More about photographing children – Photographing Children)

Quite frequently a scene tends to interest us a lot. Lots of factors around it further impress us a lot. Imagine standing on a hill-top, witnessing the scene in front of you, while the cool wind blows across your face, birds chirp around, the smell of flowers fills the air and you are happy at having taken a well-deserved vacation after completing a tough task at work. You might have also got a raise or promotion. The scene that is in front of you becomes more beautiful to ‘you’ because of all the things that you can feel and because of all the things that are in your mind. The photograph? The photograph will lack all of these and turn out a mediocre image for most viewers. It is now up to you to convey that same feeling to the viewer. Include the main elements that make that scene for you.

Include flowers to show the smell, include a smiling you if you yourself are happy. Yes, try portraits instead of landscapes. Capture the landscape but have something for the viewer to focus on. Do not create images that have a missing focal point. With nothing to hold a viewer’s attention, the image would have lost its impact.

My trick in such a scenario is – analyze what impressed you and then try to show that instead of just what is in front of you… and have a focal point! (Story in a Photograph)

Another thing to be aware of is to avoid multiple focal points. Try to have just one focal point. This works for most compositions.

(One of my friend says that I have used a very derogatory term for this mistake. I have done so specially to let my readers be shocked and to keep them away from this.)

I am tired of seeing the same monument, the same old man, the same sensual model and even the same landscape… in exactly the same way! Please spare me and your friends. Show something new. Don’t copy what someone else has done and earned accolades. Be original.

The other day, my neighbor argued saying that with so many camera and so many photographs being created every day, almost everything that can be photographed has already been photographed from every conceivable angle. Sure, it may be the case. But, do you have to be the one to copy others and then do it? Just be original to yourself. It may later turn out similar to someone else but then that would be co-incidence and not copycat work.

The reason for my strongly opposing this copycat thing is that it kills your own creativity. Doing what everyone else is doing is not the correct mantra! I insist on reading this article too – Moving in a herd? 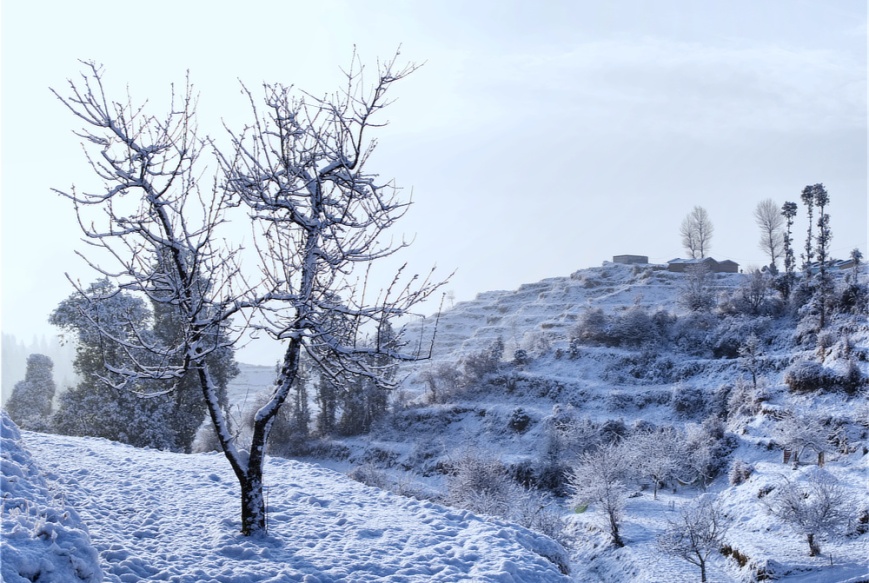 (Just a Winter Landscape. Sometimes sitting inside on a sultry rainy day with no chance of going out, makes me miss the cool winter landscapes. Uncomfortably cold and yet beautiful! This is just a spacer, nothing to do with the main article)

A simple oversight leads to these mistakes. A tilted horizon, an electricity pole sticking out behind the head of the subject in your portrait, contradictory elements (a stack of garbage when photographing a beautiful sea-shore), photobombs, electrical wires in the foreground of your magical landscape, accidentally closed eyes or a weird expression in those portraits. Avoid these, recompose the scene, click again.

Thankfully you have the luxury of a preview screen. Use it to analyze the scene if you have to.

Mistake 9 – Not Working the Scene

Just because the scene in front of you looks wonderful, does not mean you should go click click click. Move around, explore the scene. We tend to call it ‘work the scene out’. Explore viewpoints, the various camera angles and how to capture the same scene. There will be lots and lots of more powerful ways to capture a scene rather than just standing and clicking when you first saw it.

Sometimes these ‘straight on captures’ from the way you see them, may look very strange as photographs. Photographs of kids and pets taken from a high view-point are some notorious examples.

Photographers have a word for those spoilt compositions when you don’t tend to move around. They are called ‘lazy compositions’. Avoid them at all costs. Walk around, experiment with different angles, work the scene out!

Mistake 10 – Not reading my earlier articles!

No, not a joke. On a serious note and at the risk of being repetitive, I want to point out these earlier articles of mine. Do read them up.

Father's Love !
A late evening photograph of Trishul peak. Nature is beautiful. -2 EV exposure.
Spotted this spider in the garden of @hillcottages
A cascading mountain stream. These streams always attract me. I was there with some guests from @hillcottages . We had a great time and did some wonderful photography. Shot on Nikon Df with Zeiss 25mm lens, post processed on Affinity Photo.