Some of the photographers asked me about some tips and tricks to capture various emotions. How can they express themselves? What does it mean when mentors say that you should use your photography as a medium to express your own feelings?

(Row of trees – the overgrown forest gives an eerie feeling)

This is the first article in a series which I will be writing over the coming days. This is about how to capture and express a feeling of fear and angst.

Let me start with a simple example of the photograph above. The key points which bring about a feeling of fear are – the overall low key photography, the thin pathway with tall and dense forest around it, the dark foliage on the right with over-powers the path and the grey overcast sky which is further hidden behind the tall tree on the left. Absence of another human source, any vehicle or even a dog further adds to the loneliness of the scene. A soft focus filter was used in front of the lens to add drama to the composition. 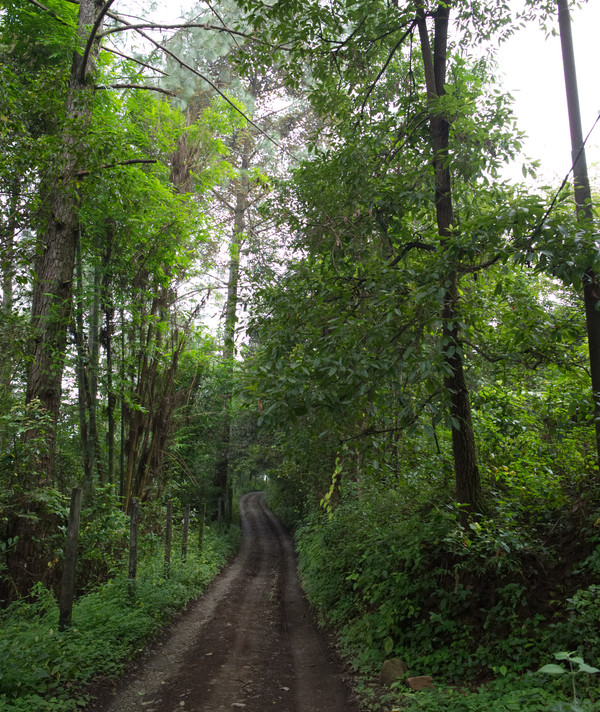 (The non-scary version of the above scene)

The same scene was photographed in a different way in this photograph. The foliage is well lit, the orientation of the photograph has reduced the amount of foliage on the right and increased the amount of bright sky. Clarity of the scene further does away with the spooky factor.

So, how to decide what to include and what not to? In the spooky photograph in the beginning of the article, I emphasized on what elements in the scene were stirring up these emotions in me. The darkness of the foliage? Yes! The Pathway? To an extent, since there was nobody there, but this was going to be effective only with other elements supporting the feelings. Bright sky? Not at all! Overcast skies are usually sad but not when they are bright. Details in the foliage? A small factor but it lets the viewer see things clearly, so not something which contributes to the emotion that I wanted to show. Using a soft-focus filter blurred some of the details and in turn added a freakish or surreal feel to the image.

Decide on what contributes to the emotion and what does not. Anything that strengthens the composition needs to be stressed upon and anything that does the opposite needs to be avoided.

These are the elements that give rise to a feeling of fear, despair, loneliness or even terror at times… but only to a certain group of people. These get settled into a person’s mind since childhood, by way of religious or cultural practices, stories and folk-lores and so on. An Indian brought up in a Hindu family while hearing folklore of spirits and jinns, may be scared of even walking near a peepal tree / sacred fig. A God-fearing Christian person will not be very comfortable in a graveyard at late hours, especially if he has seen some of the popular horror movies.

(Ancient ruins look even more sinister due to the hanging branch of a Peepal. Nikon Df with Zeiss 25mm lens, f/8, shutter speed 1/200 at ISO 100. Exposure compensation -1EV. A green filter was used on the lens. The trees on the top left were burnt and the building on the left end were dodged a little. Burning and Dodging)

Elements commonly associated with this emotion

Old abandoned buildings, tall walls / fences, fog, symbols associated with death and suffering and many such elements when used properly in a composition can bring about an emotion of fear in the viewer.

In the image below, I have used tall metallic fence as a cold and forbidding element, behind which is a rock and fog. Do read about it here – Frog Rock at Bhimtal

(By using a vignette and low key technique, this scene also was made to look scary. The inclusion of the tall metal fence adds to the eerie feeling.)

Still water, dry deserted lands, old buildings with broken windows and even ruins of ancient architecture can be some of the easy subjects to start experimenting with these theme.

(A simple composition with sunken old tree in a still lake. The crooked nature of branches adds to the composition and still water conveys a feeling of an impending calamity or doom.)

In fact, hollywood film makers also use these tricks. If there is a long lasting shot of still water, take it for granted that a monster is going to jump out of it. A long duration shot of a window or glass covered with fog, will have something come to it in an instant. A human hand or a disfigured face will further strengthen the reaction. Add to that the sound effects and it becomes easy. Photography is not so simple. Being a soundless and motionless medium, it takes effort to produce an intense reaction.

The range of fear factor

It may range from simple despair to a panic filled horror. It all depends on how the image is captured. Humans in general associate well with other fellow human beings. So, for bringing out the higher levels of fear – human elements have to be included too. These photographs can combine the above techniques with a scene which in itself may be scary.

Since my articles are frequently read by young minds too, I am leaving out such photographs from here.

… and what does not constitute the art of creating fear

Father's Love !
A late evening photograph of Trishul peak. Nature is beautiful. -2 EV exposure.
Spotted this spider in the garden of @hillcottages
A cascading mountain stream. These streams always attract me. I was there with some guests from @hillcottages . We had a great time and did some wonderful photography. Shot on Nikon Df with Zeiss 25mm lens, post processed on Affinity Photo.