(An old photograph that I had clicked on a film camera, with a group of photographers. All of us then had a different concept of composition and what to click)

Today I was browsing through online albums of photographs captured by some of my old friends and acquaintances. Most of them are advanced amateurs and have invested heavily in photography equipment.

The first thing that struck me was that there were clear trends in their compositions.

Some of them who are into bird photography had repeated shots of the birds. The same bird, same background and even the same angle! What I saw was a group of them walking together, armed with their lenses. Someone spots a bird and all of them point their long lenses and start shooting. Not always, but quite often.

An interesting anecdote told by one of them – Three photographers (and friends) took a short vacation and went on a bird-photography based nature walk near a lake in the hills. One of them called me also to join in but I gracefully declined. Bird photography is not a genre that I am really fond of. They came back from the trip with wonderful pictures of birds. Sharp, well-lit, nicely exposed and clear shots of some of the birds from that region. Well, it seems that there is a business in bird-photography nature walks too. One of them opened up on one fine evening and told me how they captured the pictures. The locals (and the bird guides) have set up locations where they keep attractive food and water for the birds. A small tent is set-up for the deep-pocketed photographers to crowd into. The perch for the bird is set up. Once the bird comes to the perch (which it usually does for the ease of getting food), the photographers click the same bird, under the same conditions. How does the perch differ in different photographs? His answer was simple. Perch is moveable. These places have a collection of 5-6 perches that they set up every morning. Wow! Me – “The background too looks interested.” “Yes, it does, does it not? That’s a printed sheet that they hang in the background at some distance. It gets blurred in photographs and they change the sheet every now and then”, was his reply! I burst out laughing. No wonder all their photographs had the same perch, same bird and same out of focus background. On the other photographs, all three of them once again had similar results.

All the birding friends of mine don’t go to that extent but still many of them end up with similar results. So, I guess that a forest trail with a pack of photographers is also not a good idea for photowalks. (Photowalks). By the way, there are a few birders whose work I really admire. They click their photographs differently.

Coming back to the main reason why I started with this article, as I mentioned earlier, the photographs had a common trend in them. It was hard to tell who had clicked which photograph. It was a case of lost individuality. None of them had the signature style of the person behind the camera. All that was there on the photograph was a common ‘so and so photography’ watermark! Sad. 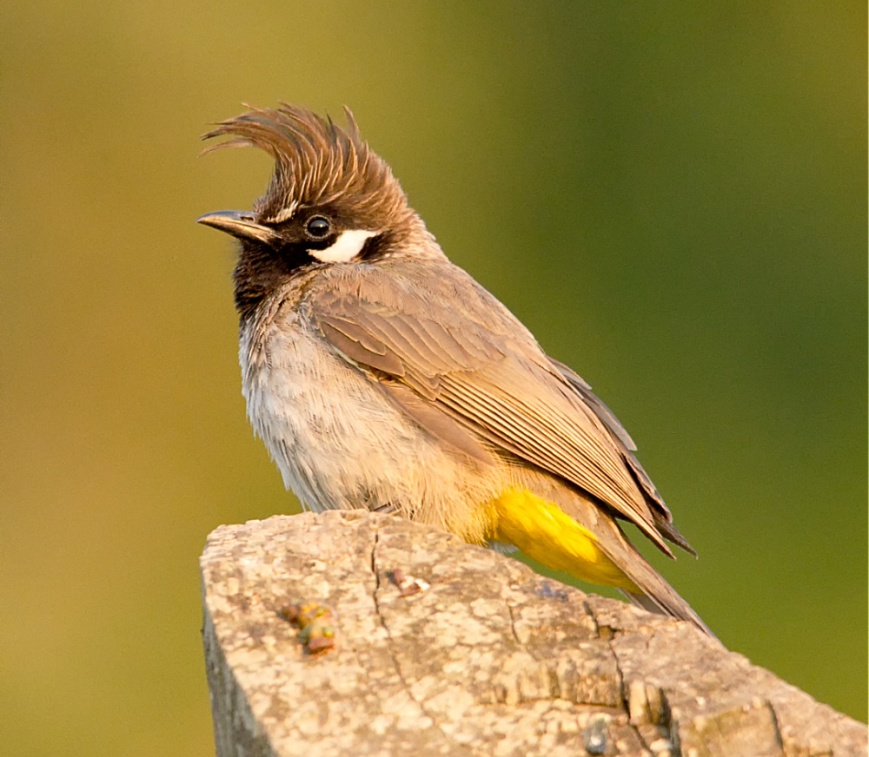 (Yellow Vented Bulbul – captured on a photowalk with a friend. His interest was in the landscapes and I was trying to photograph some birds for marketing Maini’s Hill Cottages)

Next I saw the albums of some photographers who had been going out in groups to some famous places in the city. Old buildings, portraits of the same old person, the street with the rickshaw puller. Once again the same trend. A herd mentality. Each one of them had tried clicking the same subject from the same angle, and ended up with the same composition.

Thankfully, most of these people have a good social media presence. The numbers of wows and likes greatly help boost their ego. I have seen such photographs going viral, being shared on social media. One of the photographs of a child with begging bowl made multiple rounds on social media and the there were at least three more photographs captured on the same location which did similar rounds. From a photographers’ perspective, it pained me a lot when I saw such a heavily edited photograph with reduced saturation (and vibrance), high on so called ‘structure’ and ‘clarity’, and on the brink of being overly dramatic. These seem like photographers who pursue their hobby for social validation, a feeling of belonging, being a part of larger group! 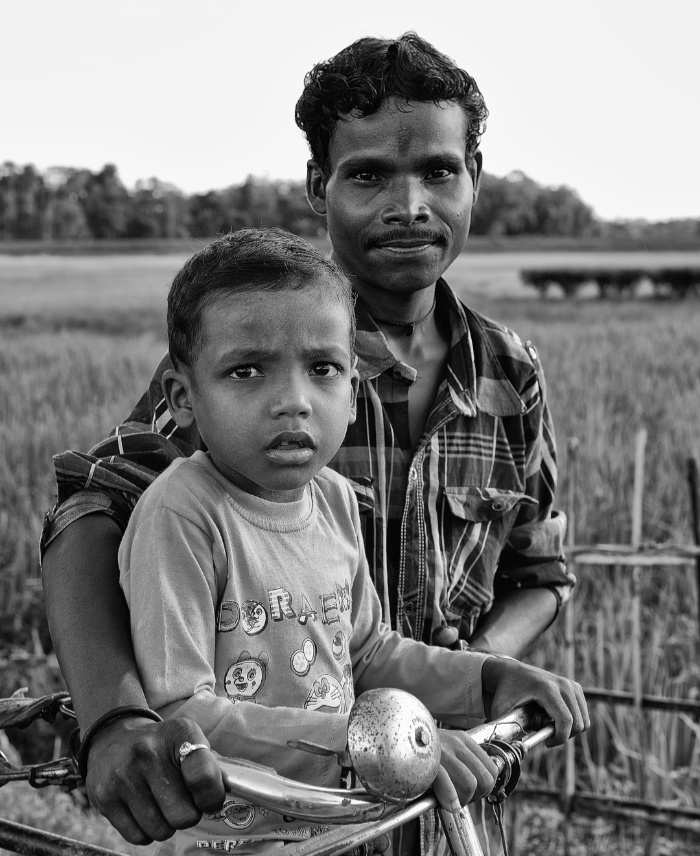 (A rice farmer with his son. Just a snapshot I captured while on an assignment.)

Herd mentality makes its mark felt in the post-processing and photo-editing too. Like I have said this pains me. Heavily edited photographs with lots of filters on them are the latest trend. Once again a flurry of wows and likes flood them. Under or over saturation, dramatic effects with heavily enhanced clarity, structure, vignettes… (Photography getting lost to Photo-editing). Everyone seems to be following the other people. No originality, nothing that holds my attention for more than a second. No.. not true! Sometimes I do spend more than a second reading the comments on the photographs but then I am not actually looking at the photograph.

These comments, likes and wows, shares, number of views… to me, these are not at all an endorsement of anyone’s photography. They are actually an endorsement of the networking, the number of contacts one has! Feel free to disagree with me. These just happen to be my thoughts and I am one of those few photographers who still miss the film era. 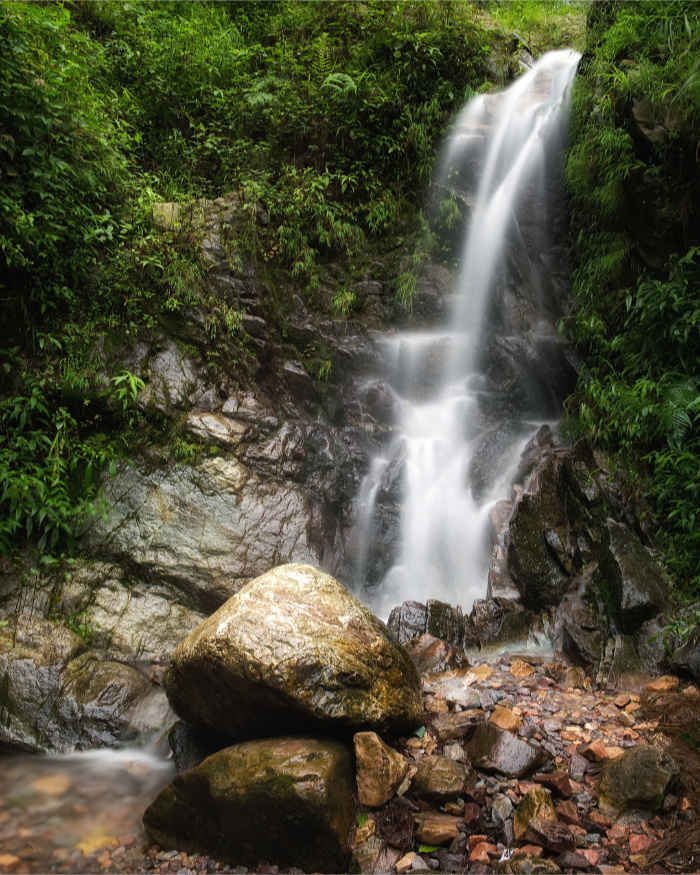 (Another waterfalls. Can I help it if these waterfalls and mini-cascades look attractive to me? In this particular photograph I went with the present trend and used a mild soft-focus filter and improved the middle level contrast)

For those of you, who are still with me in this essay of mine, here are some things that I recommend-

Popularity is not an endorsement. Just because someone has a large network, does not mean those photographs are worth copying. I can understand the longing of being a part of the group and making an effort worth some praise. This is our evolutionary instincts at work. (A good hunter had a good network).  Grow above them. Make your work speak for itself.

100 photographs of the same composition makes all those 100 photographs worthless. What if Leonardo Da Vinci had been a robot that painted a few thousand copies of Mona Lisa? Would it still have been that famous? No! Maybe famous but definitely not as much as it is now. Why do you then want to click the same old building or the same fishing boat? Try something new, something different. (Stand out from the crowd)

Be aware of the peer-pressure. If you walk around with friends who are into birding, your mind will tell you that bird photography is the in-thing. You should be doing that. If you are with some street photographers in India and trying to copy street photographers who happened to be just visiting India, you will end up with countless images of beggars, religious persons, people selling their wares on streets and vagabonds. Are you trying to create another ‘Slum Dog Millionaire?’

… and ditch the trends. On the risk of being repetitive, I still recommend avoiding all those trending photo-editing tricks, plug-ins and filters. Be original! Express yourself instead of copying the trends.

“No man has the right to dictate what other men should perceive, create or produce, but all should be encouraged to reveal themselves, their perceptions and emotions, and to build confidence in the creative spirit.” – Ansel Adams

The photographers who always get my silent approval are the ones who pursue photography for the sheer pleasure and for their own expression. I have a friend who clicks wonderful photographs and then keeps them for himself, to enjoy their beauty and the purity of his interest. No herd following, no copying, no efforts in trying to get a validation of his work…. just pure and simple photography… for the love of photography.

Be aware of the danger of falling into this herd mentality. Admire the works of others, learn from them but don’t blindly follow them. Let your own creativity shine through.

One thought on “Moving in a herd?”