Tripods have been the most used photography accessory since the time photography came into this world. Old films of ISOs less than 100 demanded a very slow shutter speeds. Did you know that when the first (original) Kodachrome was launched, it had an ISO equivalent of 6 ? By early 1960s were they able to cross ISO of 25 ! Tripods were a must for good natural light exposure then.

Now we have super sensitive sensors with excellent noise reduction, lenses that in more and more light and mechanisms to take away some level of camera shake while shooting hand-held. Are tripods needed now a days? Do I use tripods?

When I am on a family trip, I usually do not carry a full size tripod. Tripods weigh me down and I get tired when I walk a lot. They also tend to restrict my freedom. No, I do not enjoy lugging around tripods on a family vacation. There are times when after visualizing a perfect image, I do feel the need for tripod but on the other hand had there been a tripod weighing me down, I might not have visualized the image.

I do carry a small Manfrotto tripod with me. It is small, light weight and supports a light body with a standard lens. I find it useful for those moments when I do not have the heart to balance my camera on a piece of rock or when I want myself to be a part of the family picture. This one weighs less than 200 grams. 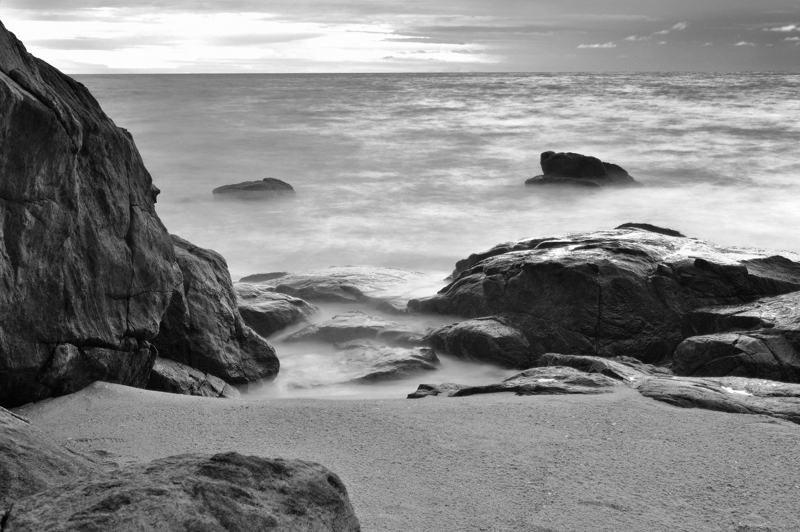 (Seascape with motion blur. Nikon Df with 50mm lens, f/16, shutter speed : 8 sec, mounted on a Manfrotto Pixi mini tripod which was placed on a rock)

I am not at all against standard tripods but I do not carry them on family trips. When I am traveling alone or when the trip is meant for birds/wildlife/low-light photography, I frequently carry my tripod. I use tripods with long lenses. The high magnification also magnifies the camera shake due to hand movement. The standard trick used by photographers to use the inverse of focal length as the minimum shutter speed, becomes a difficult preposition to stick to. Either risk increasing the ISO and adding noise (even with the super sensors now a days, noise can be a problem) or use a slow shutter speed and risk camera shake. Someday when there is an affordable 500mm lens with f/2.8 or faster aperture in a small compact size without using any mirrors with image stabilization, I may edit the statement above.

Though Tripods are the best support available, I do not have them with me all the time. These are some of the tricks that I use to get away with decent pictures even in low-light, low shutter-speed scenarios – Camera Shake – How to avoid it?

I’ll go for the second option if I had a tripod without giving it a second thought. All said and done ISO 100 is still better than ISO 400 (if you don’t have an ISO invariant camera). Camera shake is worse than noise so without a tripod, the first option is a no brainer.

Comfort and stability that the tripods / monopods provide is unmatched but I never permit them to bind my mobility down while photographing.

So to answer the question…..Yes, I do use tripods, but not at the cost of comfort and mobility. More on buying a good tripod – Buying a Tripod

(My favorite travel tripod – Manfrotto Pixi. It fits in my jacket pocket.)