With the festival season going on in full frenzy, the village near my place also celebrates the season in its own way. Due to Covid-19, the celebrations were toned down. There was mask on every other face. People avoided gathering up in crowds… and yet the season was festive.

One of the major attractions in the region is ‘Ramlila’ or enactment of the Ramayana. It lasts for ten days. This was an opportunity to capture some interesting scenes from the spectacle and from behind the scenes.

(In the role of Hanuman! Added the photograph here to break the monotony of text. Photographed later in the day.)

I have a habit of carrying just a few lenses with me whenever I go photographing. Most of them are primes. This forces me to visualize images in the perspective served to me by the lenses that I have in my bag. On the day when I went to Ramlila, I had a Micro Nikkor 105mm (manual focus) and a Zeiss 25mm (also a manual focus lens). No autofocus lenses and no zooms either. On a full frame body, over the time, I have developed a fair idea of the angle of view with these lenses and the kind of image they provide.

The place was a short walk away from my home. On a winter afternoon, the sun was pleasing but too harsh. Maybe some clouds would appear and soften the light a little. 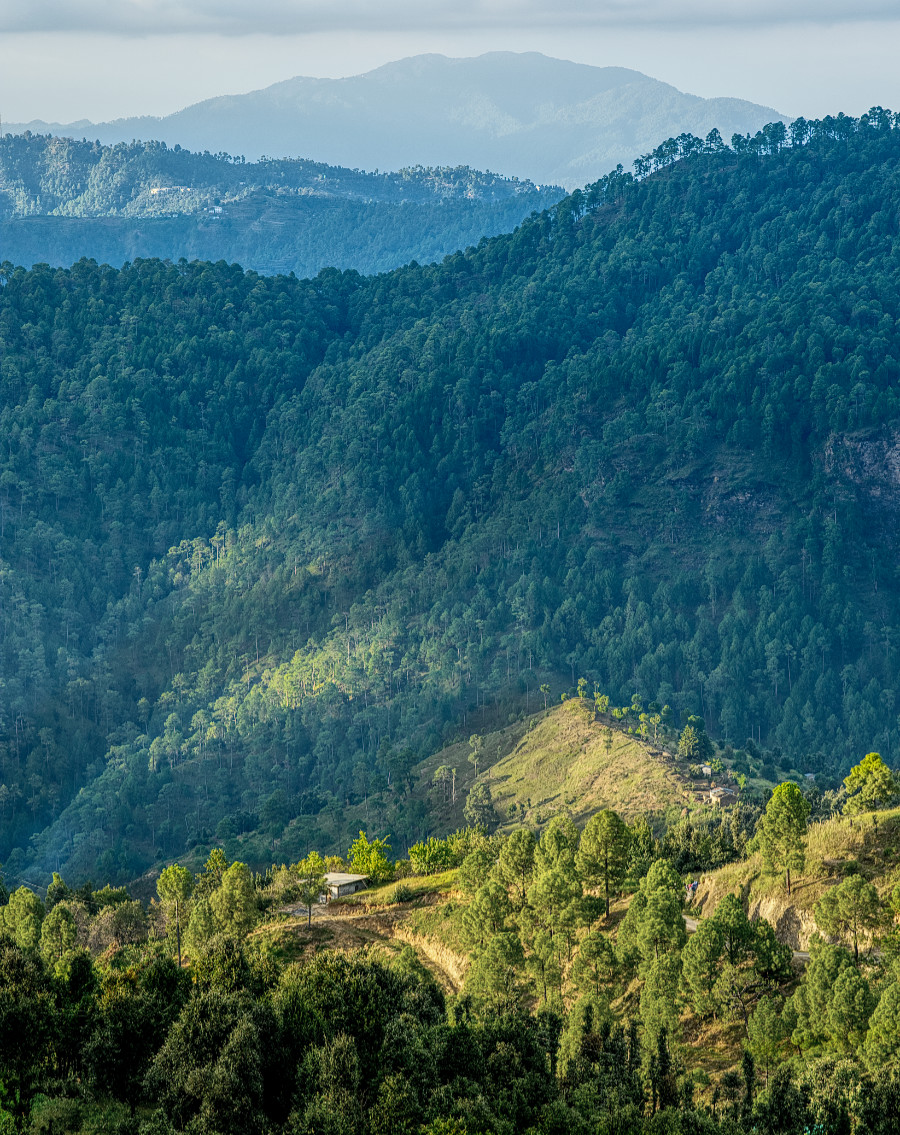 (Just a few days back, clouds and sun were playing hide and seek. For this day, I could just hope for a similar weather later in the day)

While I walked towards the ground, I could see villagers in colorful dresses flocking towards the place. Sadly, they had their beautiful faces covered in masks. If this is the new normal everyone seems to be talking about, it is too depressing. I tried capturing some of their portraits but with the masks on, each and every photograph was a disaster.

The only reassurance was that the actors were to perform without any masks, in an open stage with lots of distance from each other. Maybe those photographs would be nice.

Though it was late in the day, a flock of magpies flew by and perched on a tall oak nearby. Usually these birds do so in the morning hours of late in the evening. They love to feed on food that falls down on the ground once all these festivities end. Sadly, the magpies were too far away, to be captured nicely with the lenses that I had. A birder would have had a field-day with so many of them.

The Ramlila was being performed on a barren field, with a make-shift stage of wooden boards and clothes. The make-up room was a dusty area demarcated by a worn down tent. The interesting part? In the village, all the roles are played by males. No females take part on the stage though they do gather around and enjoy the show.

(The village head dressed up as Sabri, an old lady from Ramayana. The red light that’s getting reflected from the tent’s cloth adds an interesting touch of color to the image.)

The actors were people I know from daily life. Most of them farmers, two shepherds, one driver, some school kids, and some daily wage workers. This was an interesting mix of people, coming together in these tough times, to lift the spirits of the villagers.

I had mounted the 105mm lens. It’s tack sharp even as a portrait lens apart from being a very handy macro lens. After exchanging some greetings with the people there, I peeked inside the make-up area. Some really interesting activities were afoot.

(The farmer who has an apple orchard next to my place, applies make-up to another farmer from near the stream, for the role of Ravana, the villain from Ramayana. Captured at f/8 with 1/125 second, on AutoISO. Post-processed on Affinity Photo.)

The light inside the make-up area was low and diffused. Good for photography in general, but with slight problems due to high ISOs. For the above photograph, I chose a f/8 aperture. This gave me enough depth of field on Ravana’s face and the hands of the make-up artist, while keeping the background and details of the make-up artist blurred. Both of them were sitting quite still. This was helpful.

After completing the design on his cheeks, they took a break. Someone came over with some mints that they shared. The person playing offered some to the actor playing the role of Hanuman. It was indeed interesting for a person like me, who has been brought up in an environment where Hanuman and Ravana are shown as enemies. Here, behind the stage, they were sharing mints and joking around.

The young boy who was playing Laxman was almost in fist-fight with another who was playing a role in Vanar-Sena. In Ramayana the soldiers from Vanar-Sena are dedicated to Laxman too, the younger brother of Lord Ram. Here the boys playing the roles were almost duelling over who was going to have the fresh apple lying on a table. By the time they decided, yet another boy from the act polished it off!

The person playing Hanuman has a small groceries’ shop round the corner. He also has a small farm. After having his mint, he got busy with applying some basic make-up on his own. 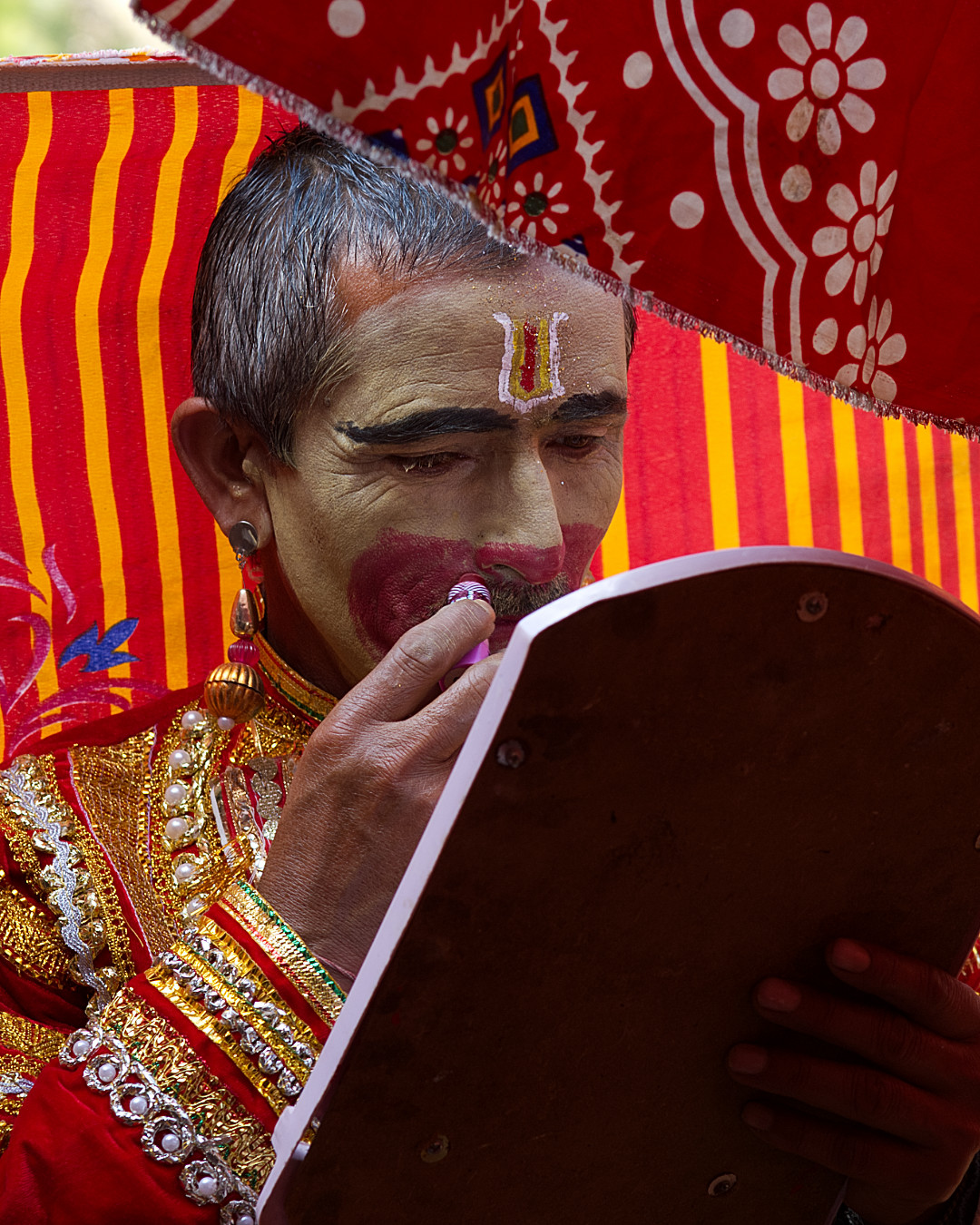 (His bright clothes with gold and silver seemed to be in unison with the clothes hanging around. The dark back of the mirror, the tilted fabric on top and the sharp focus on face helped this image. Fibonacci Spiral in action? Also captured at f/8 with 1/125 shutter speed.)

The magpies that were sitting on the tall oak, were now starting to become daring. They were now sitting just next to where some people were having snacks. Maybe by the time I am done with photographing actors and behind-the-scene activities, they will be within the reach of my short lens.

One of the interesting things about Ramlila in the hills is that there are always light moments in the performance. Humor, jokes, some laughs… they all are an integral part. Another aspect – the whole performance is musical. Instead of prose, there’s poetry!

The performance also has its own team of jokers too. One of the farmers and a kid who had just returned back from the stage after a performance were more than happy to pose for me.

(The joker duo – the photograph does not do justice to the act they both had put up! The clouds had appeared out of no where, softening the light. I didn’t have to use any fill-flash or reflectors.)

Ramlila, in most parts of India, is performed during evenings and nights. However, here in the hills, these performances take place in the day. The sun was almost near the hill on the West. In a few moments, it would disappear behind the hill. That’s when the wind suddenly turns chilling. Maybe, I’ll meet the magpies some other day.

After having a cup of hot tea, brewed in the usual Kumaoni style, with lots of sugar and milk, I bid farewell to all and walked back. My camera had some photographs and my mind was full of many fond memories.

One thought on “Ramlila at Natadol & Behind the Scenes…”