In continuation with the earlier article – Have you overdone it?, here, I’ll be pointing out some more very obvious errors. If you are committing these mistakes, try to avoid them in the future. If you are not, well and good, don’t go overboard with photo-editing or post-processing.

Remember, this article is to train your eyes to observe. So, stare at these images and see the flaws. Don’t try to skimp through it. Read this only if you have time and patience. Once you learn to see the flaws in photographs that would otherwise go unnoticed, you’ll start seeing the obvious darkroom flaws everywhere. Remember, you have been warned! 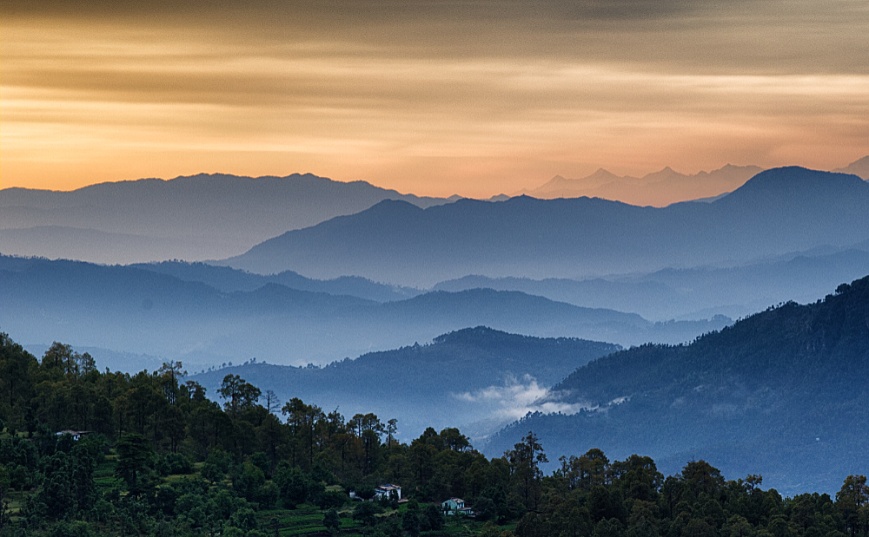 (An overly processed photograph, that actually earned lots of wows from observers. Can you point out the one major flaw here?)

Many ready to use filters on various apps, mobile phones and even plugins on popular photo-editing apps tend to add a kind of punch to the photograph. These filters rely on various algorithms and one of the most common is boosting up the contrast in the mid-region of the histogram (Understanding Histograms). This adds an obvious impact to the colors and perceived dynamic range but without actually losing out on data in the darkened shadows or in overblown highlights. Sadly some even call this ‘Pro-Contrast’. ‘Local Contrast’ is yet another name for it. Even creating a ‘pseudo’-HDR may cause this effect. The hills in the above photograph have a surreal effect due to varying distances from the photographer, causing them to be covered in varying amounts of haze.

Here is the same photograph, pointing out the most obvious flaw and two not-so-obvious flaws.

(The errors/flaws in the image. I have gone overboard with the image processing just slightly, so as to let you train your eyes to observe these flaws. In most cases of ‘over’ processing, these errors will be even more obvious.)

Error 1 – The overprocessing has caused the hills to have a glow at the base. This is because the image was over-processed. This is a very common tell-tale sign in most landscape photographs. In reality, a very minor amount of brightness at the base does exist due to the light getting reflected from haze but not to this extent.

Error 2 – That small spot is a ‘dust bunny’. This is not an error of over-processing. The dust-bunny was there initially, to begin with, but changing the mid-level contrast and adding sharpening at the end just made it visible. These are quite commonly seen on clear hues like skies. This should have been cloned out (Clone Stamp vs Healing)

Error 3 – This is the least obvious one. There is a patch of fall in brightness in the sky. The setting sun was towards the left. The sky is the brightest there. From there on, the light falls as one moves towards the right of the frame. The place where I have pointed out, there is a sudden drop in brightness, followed by again a bright patch. This is also a result of an excessive change in mid-level contrast.

This is an optical problem that lens manufacturers are fighting to date. The light tends to fall off at the edges. Various improvements in the lens designs have been done to address this. Photographers have found an artistic use of this problem. The light fall-off at the edges tends to increase a viewer’s attention to whatever is in the middle. Yes, this is an interesting tool to use but don’t overdo it.

(A mistle thrush – identified by the spots on its belly. This is another example of overdoing things. Try to observe what are these points showing, before reading on.)

This photograph was processed as I would usually do but later on, I added a vignette during post-processing. A very slight vignette but to a keen observer, it will spoil the image. (Mobile phone screens appear to be more forgiving, so it may not be that easily noticed)

Point 1 shows how the vignette affects the subject. Here the bird was lit evenly by the sunlight in reality, however, by adding an excessive vignette, the bird’s tail has become significantly darker than the rest of the body.

Point 2 shows how the corner of the photograph is unnaturally dark. Even the branch in that region is darker than expected. Once again, I have kept the vignette effect slightly less than what you can expect in overprocessed images that you might see on various platforms.

Apart from these the image also has been sharpened a little more than required. On the full-size image this was visible as a bright ghost around the dark edges (Check out the part 1 of this series for details)

What people call bringing out the structure is actually a variation of how sharpening and curves are applied. What structure does is that it apparently brings out minor details in the image. Various other filters available in the market which tend to add drama also increase this ‘structure’ of the image.

(This is an old image from my collection. The image has undergone the ‘structure’ filter.)

The first impression gets wows and likes, even more than the image I actually prefer. However, if you look closely at the photograph above, there are some very obvious flaws. The young child’s face has an obvious patch of darkening between the cheek and ear, almost like a sideburn. Her cheek itself is shining as if affected by some disease. The elder child’s face also looks dirty. The bamboo trellis on which they are hanging on to has a lot of detail that overpowers the main subject. The blurred huts in the background also have a high amount of contrast which is painful to look at. Still, the image above garnered more likes on social media than the one below.

(The version which I actually prefer. This has no boosted structure.)

This version has a smooth bokeh. The blurred hut in the background doesn’t distract. The bamboo trellis in the foreground looks natural. Most importantly, the kids look healthy and the skin texture looks real. It seems that by the time I wrote it, my breakfast has gotten cold.

Everyone is in a panic about why I am sitting here writing stuff when I should be having my breakfast. So, au revoir! More to follow in yet another article in this series. There’s a lot that can be overdone with almost every tool there is. I am just writing about the most obvious and the ones that make me cringe. Saturation is one more burning topic that needs to be explained… maybe sometime soon. Meanwhile, do check this out – Saturation – the ideal level

One thought on “Have you overdone it? (Part 2)”

A cascading mountain stream. These streams always attract me. I was there with some guests from @hillcottages . We had a great time and did some wonderful photography. Shot on Nikon Df with Zeiss 25mm lens, post processed on Affinity Photo.
Dress being prepared for a wedding. This is how ladies in villages work for many many days to prepare those lovely Indian wedding dresses.
The smiling farmer.
Rusted metal from a shipyard. I have a weakness for rusted metal, especially when it glows like this in warm light.