We saw a chameleon swinging on a dry leaf. From what I came to know, it is actually a garden lizard but it seems to change its colors depending on the surroundings. The one swinging was the third one in the generation of chameleons that live in our garden. It was enjoying the swing. Every once in a while it would move to get the leaf swinging.

The mobile phone grab of the scene was quite unimpressive. We did try a couple of shots but the wide-angle lens of the mobile phone provided a very deep depth of field and so the background kept distracting. The shallow depth of field mode in phones relies on software algorithms, I don’t like that. I guess it was time to get my camera out.

While I was contemplating on going back to the bed or taking the camera out, a bulbul came by. With its tweet ‘tea for two’, I figured that it was after all not a bad idea. Have an early morning tea, photograph the reptile and then retire back to my bed with a good book. How I love these late morning lazy hours in bed!

I mounted my favorite 135mm lens on the body. Advantage with this lens is that it is sharp and can go quite close too. (Zeiss 135 Apo Sonar or Nikon AF 135 DC) Though it is not a macro but still works fine for most largish subjects like chameleon today.

Early morning light was very low. The sun had not yet hit our garden. Can you imagine how early I had to go the market, finish off the purchases and return back? Yes, it was still not too bright. With 135mm lens, 1/125 sec was the minimum shutter speed that I could expect good results with. My  tripod and monopods were stored far away. As always, it seems that they are never available when one actually needs them (Murphy’s Laws in Photography). For using 1/125 sec shutter speed, even with the wide open lens (f/2), the ISO was going high. Flash? Nope. I strongly discourage flash for photographing these small creatures. The light is too bright for their eyes.

I waited for sometime. Then the sun-light appeared on one corner of the garden. I went ahead and placed a large sheet of white paper as a reflector. This would give me about 1 stop extra light. The ambient light too had improved.

Clicked a few shots with the whole chameleon in the frame. The ISO was still high but not a problem. These camera bodies are nice with their high ISO capabilities. The problem was with the subject. The chameleon was enjoying its swing but the tail was too long. The tail itself was about three times the size of its body. Getting the full tail in the frame reduced the impact of the photograph. Keeping the tail out made the photograph better. Take a look at the photograph below and let me know if I made the right decision to leave the tail out in this frame. 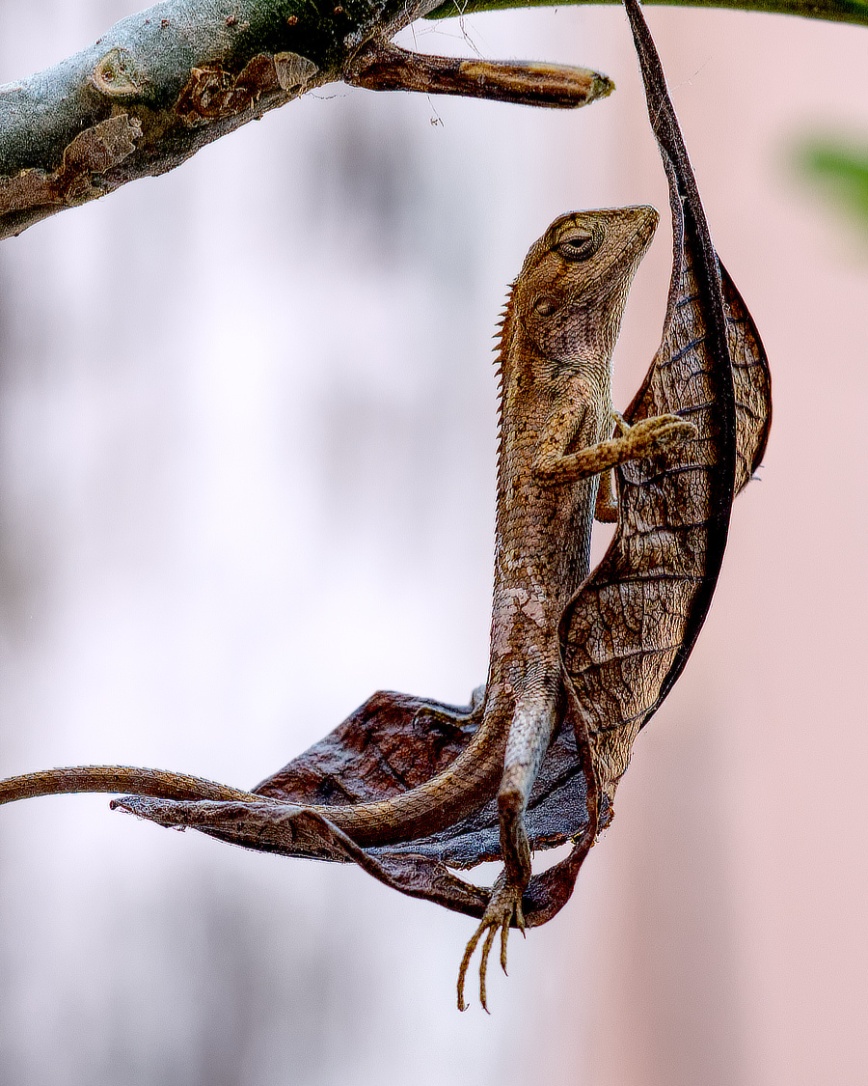 (The chameleon had a strange expression of sheer bliss. Did it just say – what are you staring at dude?)

This photograph was the one that I liked a lot. Something to show to my kids. Nikon Df with Zeiss 135mm lens. Aperture Priority mode at f/5.6 and shutter speed 1/160. Exposure compensation dialed to +1 EV and ISO was set to Auto. Camera chose it as 900. 3D Matrix metering. No filters used!

One thought on “Swinging Chameleon”