Once again, I happened to be spending some time at Natadol. The rains had been incessantly going on for many days and there seemed to have been a short break. Right time to look after the garden, collect some fruits and enjoy some walks under the tall trees. My friend says that I am in love with the place. Maybe he is correct after all.

(Clouds floating around the hills at Natadol. This is what I saw on the first morning of my stay there)

Early morning, lying on my bed, I could hear the chirping of the birds outside my room. It was quite cold but that did not stop me from getting out of the quilt and grabbing my camera. Work at the garden could wait, the birds won’t!

It was quite a racket that the birds were creating. I could identify the Bulbul’s ‘Tea for Two’ call and a musical note by the whistling thrush and soon they were drowned in the loud noises of jays and magpies. My camera had a 135mm lens mounted on it. I stepped out. For me, watching the birds and enjoying their antics is more important than bird photography itself. I took the camera just in case I spotted something interesting.

When I stepped out, still half-asleep, I was suddenly woken up by the view in front of me. There were clouds all around in the valley. Some peaks were visible. With every passing minute, the scene was changing. They were floating around, playing hide and seek with the hills. The gentle breeze swept my face, bringing with it the smell of morning air scented with the smell of moist foliage and pines. I was clicking away the clouds when a stripped babbler came and perched itself comfortably on the fence to the left of me. The birds! Yes, I remembered them. Anyway, soon the sun would be up and the clouds will then loose their mysticism. I captured a few more shots of the clouds.

(A single cloud floating between the hills, while the landscape was still covered in a blue haze.)

By then I was fully awake. The landscape was starting to light up. I could judge it by my camera’s light meter. I was on aperture priority mode and slowly and slowly my camera’s shutter speed was creeping up. Soon the sun will also show its face, if the clouds let it. I went back into the cottage and changed the lens to a long tele. Now I was looking like a certified birder. A long tele and a camo-hat!

Walking around in the garden, the first two birds to catch my attention were doves. They are called turtle doves (and the other one it seems is called a spotted turtle dove). Interesting name for a pigeon! It happens to have a beautiful back which looks like a turtle and a greenish/grey belly at times. One of the skills to have while photographing birds is learning to approach them. Turtle doves are easy birds to learn this skill with. They are not easily scared and so let the people come quite close to themselves. Just don’t execute any sudden movements. Time for a confession too – I can’t really distinguish between turtle doves and spotted doves. It seems that they are two different birds. Correct me if I have identified this one wrongly. After all, I am a photographer and not a birder! (Birding & Bird Photography)

(This one was roaming around in the lawn)

(Another shot of its friend. These are quite docile birds and generally not easily scared!)

Once again, a couple of Bulbuls flew past. They then settled down on a tall oak tree and started demanding their earlier order, ‘Tea for Two, Tea for Two’. I tried focusing my camera on them but the dense foliage of the oak occluded my view.

These bulbuls are yet another birds which are easy to approach. They usually don’t feel scared or fly away. However I have noticed that just a bit of noise and off they go. Once my mobile phone rang while I was standing quite close to the bird and off it flew.

Babblers are also similar to these birds. They come quite close to humans without being scared. A striated babbler settled on itself on an apple tree and soon it was followed by three more of its kind. Time to try my approach on these!

Quietly I sneaked in towards the apple tree. The striated babbler sitting closest to me suspiciously looked towards me. I froze in my tracks. After a few seconds, I again moved a little closer. 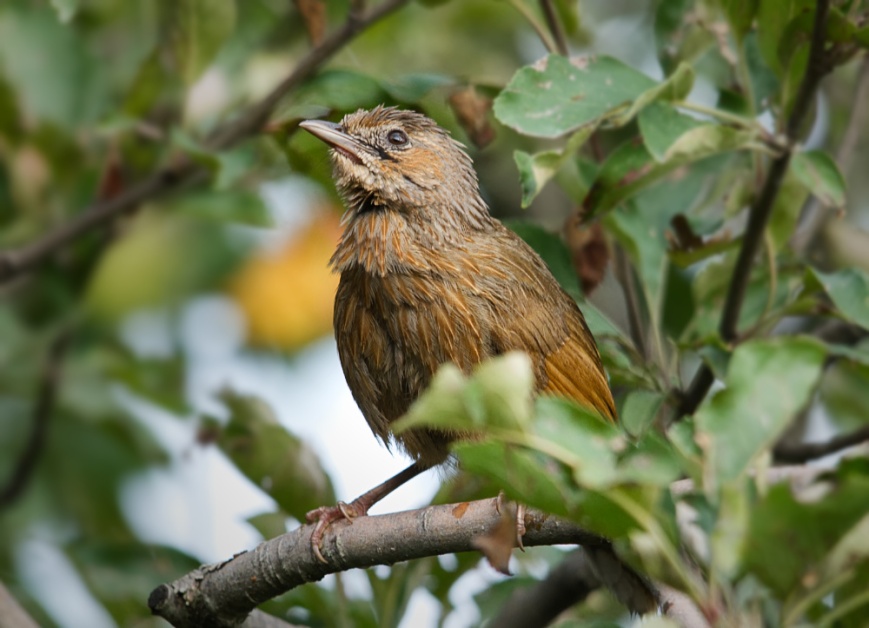 (Striated babbler on an apple tree. It was quite suspicious of me. Photographed from about 2 meters away)

I am not a bird photographer, for me these photographs are a part of the marketing campaign that I will be running for the Maini’s Hill Cottages. Still, I am learning to enjoy spotting these birds and learning about their way of life.

Suddenly the birds singing out their songs, got a percussionist too. The whistles and songs now had a very rhythmic ‘tat, tat, tat’. A woodpecker had landed on a wild apricot tree. Rat-tat-tatta-tat-a-rat-tat-tatta-tat-a…. Woodpeckers are cautious creatures. They let a person approach them but they also maintain a safe distance. Going up and down the trunk, they maintain their comfort zone. Step into their comfort zone and they tend to screech and fly away. To me it sound like they are actually swearing out of anger rather than screeching out of fear! 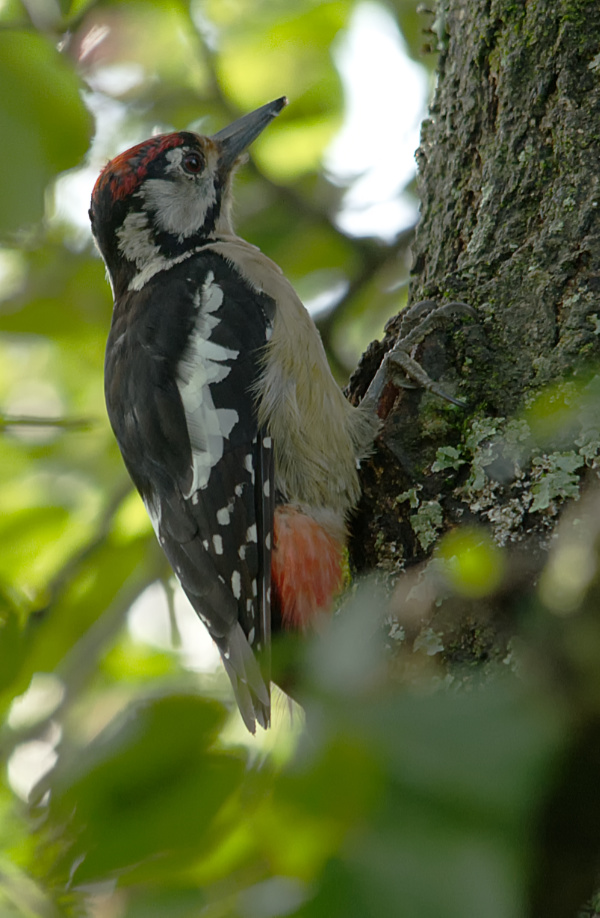 (Woodpecker on the wild apricot tree)

Carrying around the heavy tele lens mounted on my camera is not something that I really enjoy. Now after capturing these birds, I wanted to go back to my favorite 135mm lens. Maybe pen down some words about these birds, while sitting on my favorite chair, my window overlooking the valley!

My trip to the garden had been successful as far as birds were concerned. The clouds started to gather up again and soon it started to drizzle.

None of my cameras or lenses are weather proof yet I don’t feel uncomfortable while using them in such weather. This is something I tell my friends too. The worst that can happen is the equipment getting spoilt. This would give a justifiable reason for you to satisfy your ‘upgraditis’ or ‘gear acquisition syndrome (GAS)’. So, enjoy photography and don’t be over protective of your photography equipment. (10 Fears that bind photographers down)

It had started drizzling a little. I started walking back towards the cottage. A few stray drops of water are fine, but from the looks of the clouds, I expected quite a downpour. Climbing the way back to the cottage, I spotted a black-headed jay. They are also quite common and seem to love the fruits from our garden. One of the reasons maybe that we don’t bother with them. They are free to come and eat easy many fruits as they want and the fruits are not sprayed with chemicals.

Still the jays can be easily scared away. Though their photographs turn out nice because of their large size. Magpies are even larger and easier to photograph! I love their long tails.

Maybe a quick shot of the jay won’t delay me much. Jay also was ready to pose for me. Looking at me with its curious eyes, it seemed to waiting to hear the camera click! I was not going to disappoint him (or her?). It was getting dark and the bird was also in shade, yet I managed to get a photograph.

(The black-headed jay that was waiting for me to click)

Rain was starting to gather pace. So, I hurried back to the cottage. The lens was slightly wet on the outside. Just a wipe with a clean dry handkerchief was enough. After a few days, it was anyway going to get stored in a dry cabinet (Dry Cabinet).

It was now raining cats and dogs. Time for a nice hot tea, as ordered by the bulbuls.

I am writing this article while sipping on the tea. Outside my window, I can see lots and lots of clouds. The distant hills are hidden away. This is going to be a lazy day for me.

After a whole day of rain, the sky cleared up just a little, after the sunset. Enough for me to witness some nice pastel shades and another group of clouds moving in on the distant houses. The pastel shades and the eerie effect of the haze made a beautiful photograph, something which I feel adds the finishing touch to this article. After all, the day for me started with the clouds and then for most of the part it was spent reading a book and writing this article, and ended with a photograph of the twilight zone! 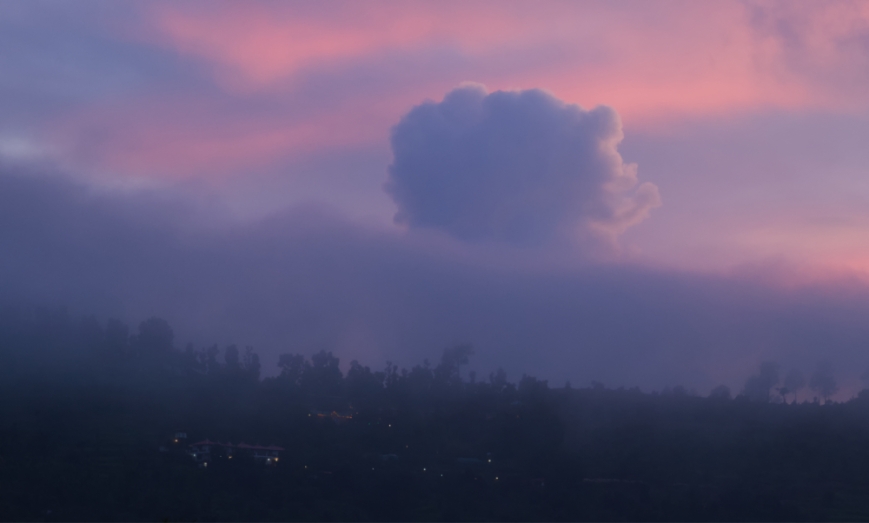 (Late evening when the clouds started to clear up)

Further Reading:
Nature Walk at Natadol
When the clouds clear up!

4 thoughts on “With Camera, Clouds & Birds”