A few weeks back, I was at Maini’s Hill Cottages, NataDol with a friend. Nice and cool night with no moon in sight. Once the sky was almost dark, we planned on capturing some night shots of the cottages itself. Switched on all the lights and went out to the far end of the driveway… tripod set, camera set, exposure settings checked… and we started capturing the scene. These were to be used for marketing purposes.

The roof was turning out to be particularly dark. I was not in a mood to ‘light-paint’ it. Easy way out: do a longer exposure and later burn down the brighter areas during post-processing, maybe create an HDR. I went ahead with a slightly longer exposure. The result was a nice capture of the cottages which could be used for marketing purposes.

(Night capture of Maini’s Hill Cottages. Everything turned out fine. The enlarged photograph looks beautiful. The only minor thing that I noticed – star trails were starting to develop on the few stars that were visible at that time. I had crossed the so-called 600 rule)

There is no rocket science in capturing star trails. In fact, it is one of the easiest things to do which can garner instant wows.  All you have to do is to get the basics right.

The sky rotates 360 degrees in 24 hours, or 0.0042 arc degrees per second. (All right, all right, it is the earth that rotates making us feel that sky rotates…)

Find out about the angle of view of the lens that you are planning to use. For example – A 50mm lens has an angle of view of around 45-60 degrees. To capture star trails the length of one-quarter of the frame on a full-frame camera, that translates to an exposure of about 1.5 hours or so, depending on the exact angle of view. Try to figure out the calculation yourself using the first fact in this paragraph.

Longer the focal length, lesser is the time required to create star trails.

The easy way out, just note the location of one particular star and start the exposure, enjoy a beer with your friends while the camera records the movement. Come back when the beer gets over or when that particular star seems to have moved considerably.

When we are trying to photograph, we are actually interested in the linear movement that takes place across our sensor or film frame. Even though the angular movement remains the same, the linear movement captured by the camera will vary. At the celestial north (or close to north star/ Polaris), the movement will not be recorded on camera. So for good star trails, consider this fact too.

(The bright dot on the left is Polaris or the North Star. Notice how the movement is concentric to it and the outermost trails on the right are considerably longer than the ones closer to Polaris)

Since most of the background is dark, noise turns out to be the biggest enemy of star-trails. Here are some basics that I wrote about noise earlier – Remove Noise (Add Grain?). The two most important sources of noise that we are concerned about in Star-trails are – 1. due to sensor heat and 2. due to irregular amount of light hitting the sensor (shot-noise).

So, our aim is to keep the sensor as cool as possible and to ensure that the amount of light reaching the sensor is in an insufficient amount so as to not cause shot-noise. Capturing less of noise makes the job easier while post-processing.

There are various methods that astrophotographers use for reducing noise. Yes, that fancy term is for photographers who indulge in the photography of celestial bodies, including the creation of star-trails.

In old cameras, use the native ISO of the camera, and then run noise reduction algorithms. This is by far the commonest and easiest method to do. The only negative is the time taken by long-exposure noise reduction. It takes as much time as the initial exposure itself, forcing the photographer to loose precious time. The decision is yours. Remember that this is one of those settings that becomes a part of the raw file. (Raw files – what affects them). Noise reduction will also be required during post-processing. If you are planning to do stacking, then switch off noise-reduction.

A slightly better technique is to wide-open the lens and let in more light than required, practically exposing the image to the right of the histogram (ETTR).

Keep the camera cool by clicking on chilling winters. This also ensures a clearer sky (provided there is no fog).

Click raw and post-process. Use noise reduction available in your software. Just note one small factor – luminance noise reduction may reduce the number of star-trails by wiping out the dull trails, so use it after you have used everything else.

Spotting or cloning is useful to hide the hot pixels, which are quite common in such long exposures. 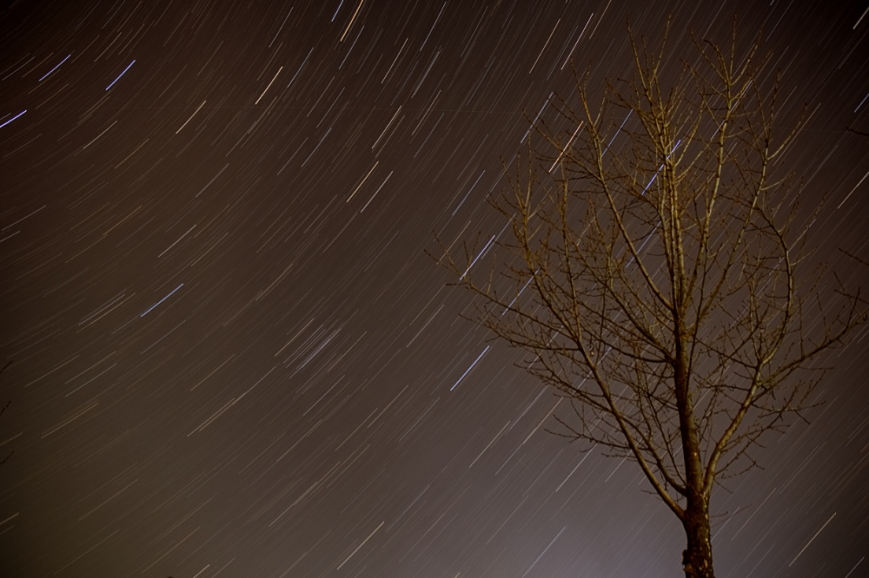 ( A 22-minute exposure on native ISO, post-processed on Affinity Photo)

Native ISO or Not?

Some photographers using new cameras, swear by using a high ISO like 1600 or 3200 (depending on the camera model) and overexposing the raw file. This is then corrected during post-processing. So much of light getting captured tends to reduce the noise. This is a hard fact to digest but using a high ISO actually reduces noise in such cameras.

Try experimenting with your own camera in a dark room. Set it on a tripod and manual mode. Capture an image of any dark object at a fixed combination of aperture, shutter speed, and focus. Only vary the ISO across in full stops. During post-processing, change the exposure compensation to exactly the same across all images. See which ISO works best for you. (I don’t have to remind you that this works only in raw files.)

The lower ISOs have the benefit of greater dynamic range so consider this also when you decide your ISO for star-trails.

The reason is that the sensors are ISO-invariant or in laymen’s terms, the sensor does not bother about ISO. It is the camera software that alters it. Get directly in touch with me if you want to know more about it.

This is the new entrant in the world of star-trails.

When you see a person standing in one place and then after a few seconds you look at him again and the person is standing at a different place. What happened? Easy, the person moved. He moved from the first point to the second point. Our mind subconsciously told that to us.

In stacking for star-trails, something similar happens. Multiple photographs are captured. The software calculates the star trails from these multiple shots and presents a single star-trail photograph with good contrast and less noise. Stacking cancels out the noise that is generated and also the time intervals provide a sensor to cool down.

One such easy to use software – StarStaX. There are many other options too, all you have to do is search on the internet. For star-trails using stacking, I recommend using one of these dedicated softwares rather than using the do-it-all common photo-editors.

If you are planning stacking, these are the things to keep in mind:

Both have their advantages and disadvantages. Long-exposure is easy and more old-school. It is easier to do it. Stacking provides more contrasty images with less of noise. Some may find those images too unrealistic whereas others find them clean. It is, therefore, a matter of choice.

(Just a simple star trail captured from my balcony. Using it as a filler to break the monotony of text)

… and mistakes do happen. A few nights back, after a booze party, I went ahead for some star-trails. I set the exposure to ‘X’ rather than ‘T’ (Camera modes (PSAM and more)). Pressed the shutter release and went away for a long duration. I came back and pressed the shutter release again to supposedly end the exposure. Result – two dark shots, taken a long duration apart! I burst out laughing on checking the preview. Yes, stuff happens!

Star-trails are easy to create. All they require is a sturdy camera with full battery power, lots of patience, and some clarity on how to reduce noise. Compose anything simple with some foreground elements and you’ll have a keeper. For me, apart from being slow-paced, star-trails also give lots of time to introspect, turn philosophical, or just have a good time with some like-minded friends.

Grandpa's are always fun to be with.
Saw this while photographing some landscapes. A beautiful silhouette of the hilltop in foreground with the setting sun. Captured at #natadol
Found this old lady on a village street. She had undergone a sight restoration surgery, and I just couldn't stop myself from admiring her stern and confident look. Clicked on Nikon, post processed on Affinity Photo.
A Hindu priest reading his religious book. I had clicked this in his small hut, using natural light only. His saffron dress, and the images on the wall in the background add to the overall feel.