With the end of summer season round the corner, Natadol, a small laid-back village in Kumaon organized a summer festival. The people of Kumaon are very proud of their heritage and culture and this event was an ideal platform to showcase that. The three day festival had all the villagers coming together, participating and putting forth three days of simple yet engaging performances. I was lucky enough to be a part of this festival and witnessed the culture of Kumaon from within.

(Kumaoni Dancers – This was a backstage shot. The girls were ready for their next performance. They were happy to pose for me. This is also how they later danced, like dolls, on the stage.)

For the performances, the villagers had set up a make-shift stage in a local school premises. The school itself was closed for the summer vacations. The tall pines and oaks on one side and the school building on the other provided some protection from the elements of nature. Some sheets of cloth were also stretched around to provide some extra protection in case of rain.

Initially, I planned on capturing some candid moments from their performances. The trouble was that I would then have been interfering in their art and maybe even distracting them. With much restraint, I let the thought pass and started enjoying the performances. Their were scenes from folk-lore, some songs, a couple of local dances and a small musical play. Overall entertaining!

During the small tea-break, I sneaked behind hoping to capture some of the ‘behind the scene’ or back-stage candids. The performers were putting on make-up, changing dresses and busy chatting with each other. The moment I took out my camera, they became quite aware of it. The natural expressions were lost. Quite frequently sneaking in with a camera is not the best way. I let the camera hang around but did not capture any photographs. The team slowly and slowly got used to my being there.

(Selfie Time – After I floated an idea of visiting the outside area of the school, the artists were happy to capture some selfies. They were now relaxed.  I was able to get some shots too).

Now between the performances, they started taking short breaks behind the stage and in the open air. This is where I also spent my time with the camera. I had a Nikon full frame with a 50mm f/1.8 auto-focus lens.

Sometimes unforeseen things can happen and cause some good photographs getting lost.  Somehow the diopter setting of my viewfinder got disturbed. It’s such a small dial that such a thing happening as an accident is quite rare but then it happened. The view-finder was slightly blurred but not so much as to cause me any doubt as to the setting. However the photographs did not appear to be in focus. I have changed the focusing screen in my camera to an old type. (Staying Focused). This helps with manual focusing lenses. When the subject is not in focus, it shows an exaggerated blurred photograph. I felt that my lens was not autofocusing properly when the image in viewfinder remained blurred. I tried various methods – detaching and then mounting the lens back, fiddling around with the AF/MF switch and also digging into the camera menu to check if the Auto-focus fine tuning setting was changed (Yes, such a setting exists in many cameras). After a few stressed seconds, on viewing the blurred viewfinder data (the green colored data on the lower side), I realized that it was the dioptre correction. Corrected it then and there. I had lost a few good photographs by then.

(The girls were busy checking their phone in their break. On approaching them, four them beautifully posed for a few snaps, including the one at the beginning of the article)

Some of them now wanted a few photographs for themselves. What more could a photographer in me ask. The girls in their beautiful attire posed for the photographs. I was happy to capture those images in my camera. Now my camera was working fine. All the photographs were captured in Aperture Priority mode with Auto-focus switched on. Auto-ISO was also on but rarely did the camera ISO change. It was quite bright after all.

A pair of magpies came by and settled down comfortably on a small tree nearby. I wanted to change my lens and use a telephoto for the birds. However before I could give it a serious thought, the magpies flew away.

(The pretty Kumaoni girl posed for a few photographs of her own. The overcast sky was a blessing for such photographs. No harsh shadows on the face and no need for any reflectors or fill-flashes.)

The villagers offered some tea with milk. The drink was hot and overly sweet but it seemed like the ideal thing to have at that time. Shifting the camera to one side, I sipped on the delicious drink. I am quite finicky when it comes to hand hygiene, preferring not to eat anything while photographing. However the idea of a hot cup of tea on the hill-top, with cool breeze and sound of chirping magpies, was something that I could not pass.

There were a handful of vendors selling some home-made items and clothes. During the cultural performances, they left their wares unattended and watched the happenings. The people in general are God-fearing and truthful. No one even touched their wares when the vendors were not there.

While sipping on the tea, I took a short walk around the school premises. In the background, I could hear a singer croon out a Kumaoni song, the words of which I could not understand. The music itself was very nice and felt very expressive.

Another couple of artists were practicing some of their steps and were happy to pose for me. Kumaoni traditional dresses made these people look very beautiful and their expressions conveyed the pride they felt in wearing these. 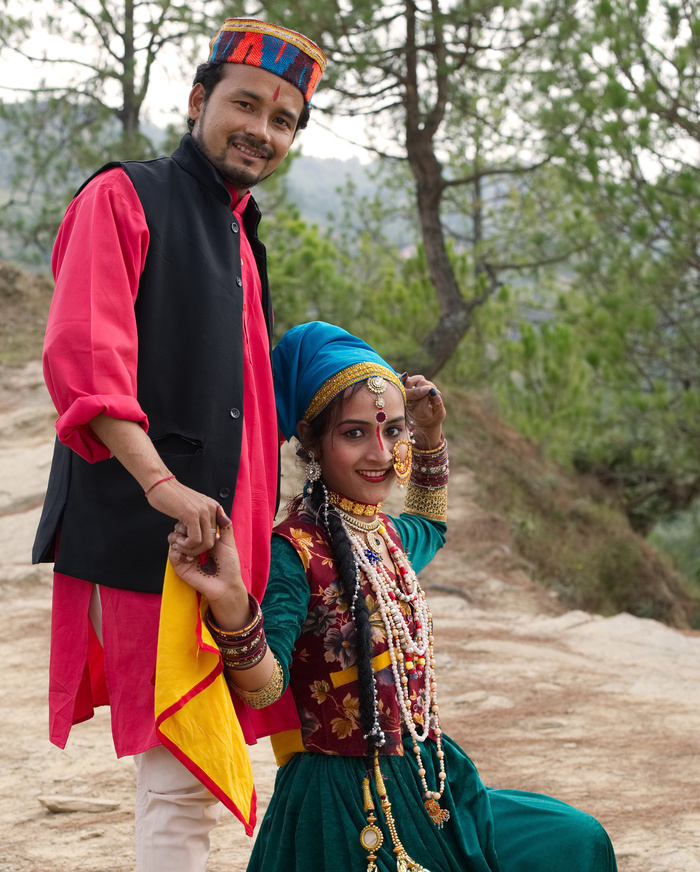 (Dressed up in Kumaoni traditional dress, the artists practiced their performances and posed for me. A very gentle and affectionate group of people!)

I ended up with many beautiful memories and a handful of photographs to remind me of the occasion. None of the candid back-stage photographs that I had expected! I also made some good friends. Now I look forward to more of such summer festivals and a chance to be a part of the culture of Kumaon.

I got some nice photographs but missed some of their performances. Sometimes, it’s a good idea to leave the camera behind and enjoy the happenings.

One thought on “Summer festival in a village”

He is a good friend and a fun person to be with. Missing the good time spent together. I had clicked this snapshot many years back. Once the pandemic is controlled, will meet again and spend some good time together.
A potter works her magic on clay.
Frosted Glass. After a thunderstorm yesterday, I got reminded on these photographs and so decided to revisit them.
The little girl smiles for the camera and her brother admires the loving sis. A fleeting moment that got caught.