One fine afternoon, I was greeted by excited shrieks of some kids in the neighborhood. They had found a caterpillar and beautiful looking one at that. A nice photo-opportunity for me. I quickly mounted my favorite Nikkor 105mm macro lens (Micro Nikkor 105mm f/2.8 AI-s) onto my camera and hurried to the place. I also carried my tripod, just in case.

The light was enough and with just a little bit of boost, I could hand hold the camera and get away with photographs without inadvert camera shake. Macro photography requires very precise focusing and stability. I opted to use the tripod. The caterpillar was not a very fast moving subject and so I had enough time to set up the tripod, mount my camera, set it up properly and shoot to my heart’s content.

(The caterpillar that was causing all the excitement)

One of the major challenges of macro photography is getting the right amount of depth of field. While focusing close, the depth of field turns very shallow. I used f/11 aperture setting to get the desired depth of field. The fact that the caterpillar was almost parallel to the sensor plane also helped. Shutter speed was 1/20 sec calculated by the camera using Aperture Priority mode and 3D matrix metering. ISO was set at 400. I could have used a lower ISO and a lower shutter speed but the caterpillar was not entirely stationary. The above settings were fine for my use.

After posing for sometime, it started exploring the neighborhood. It turned back and found another leaf to climb on to. I shifted to f/16 for these shots. The caterpillar was closer to the camera and though still parallel to the sensor plane, the depth of field was further reduced due to the proximity to the camera. 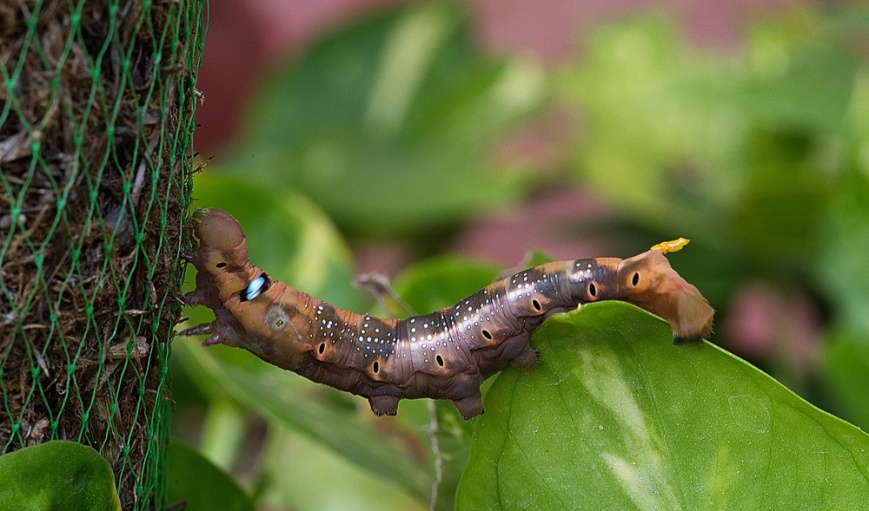 Our little friend climbed the end of a leaf and then extended itself towards a moss-stake. I thought it was going to fall off but it made it all the way to the moss-stake. It had to really extend its body to reach the stake.

Finally it seems, the caterpillar found what it was looking for. It clung to the the moist moss-stake and spend some time there. I removed the camera from the tripod, boosted the shutter speed and at a high ISO, took a final shot in vertical orientation. 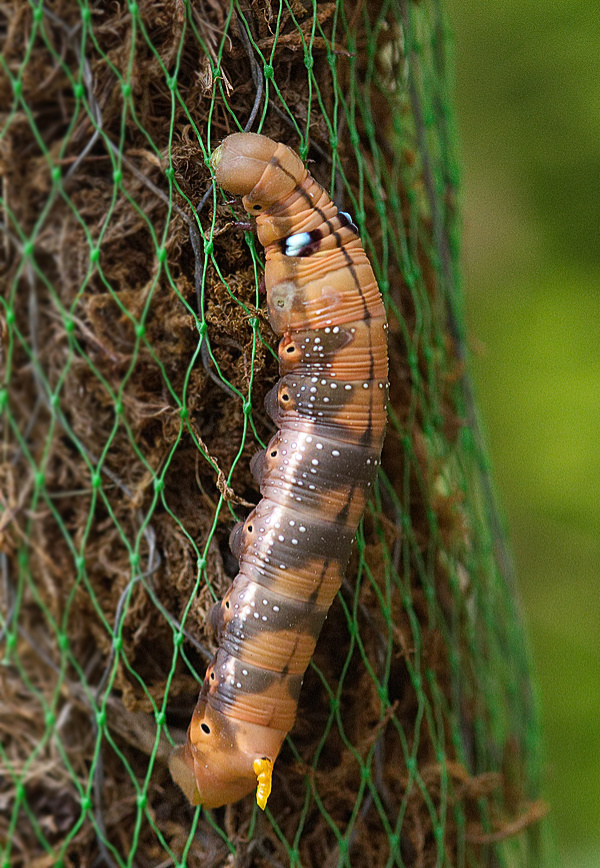 I did not use any speedlights. Somehow, I don’t find the thought of blinding the little buddies with speedlights very comforting.

From my limited knowledge of insect world and from some quick search, I understand that the caterpillar metamorphoses into a beautiful blue butterfly/moth. I welcome any information that may help in identifying this one.

EDIT: Thanks to G. K. Baliga and Rohan D’Souza, the caterpillar has been identified as Hawk Moth Caterpillar of Daphnis nerii. It turns brown just before pupating.