Since the time photography started, photographers have been trying to capture the maximum possible range of lighting conditions in their photographs. Ansel Adams perfected the zone system and worked on burning & dodging techniques in his darkroom. Film companies researched and came out with films that could capture higher and higher range of exposure values. High Dynamic Range photography was yet another step towards this.

(Recently while traveling on a hill road, I was impressed by the majestic Himalayan peaks covered in snow. I captured the above photograph as a quick snapshot. The road I was traveling on, was still in shade and the trees on the right are totally dark as a result. The photograph was processed to bring back some details in the snow capped mountains but the impact is not present. The snow itself looks dull.)

How to get the maximum details in the shadows and in the highlights?

After being impressed by the snow covered peaks in the above photograph, I captured another photograph of the same view, but with the road in the composition. The results were ghastly – 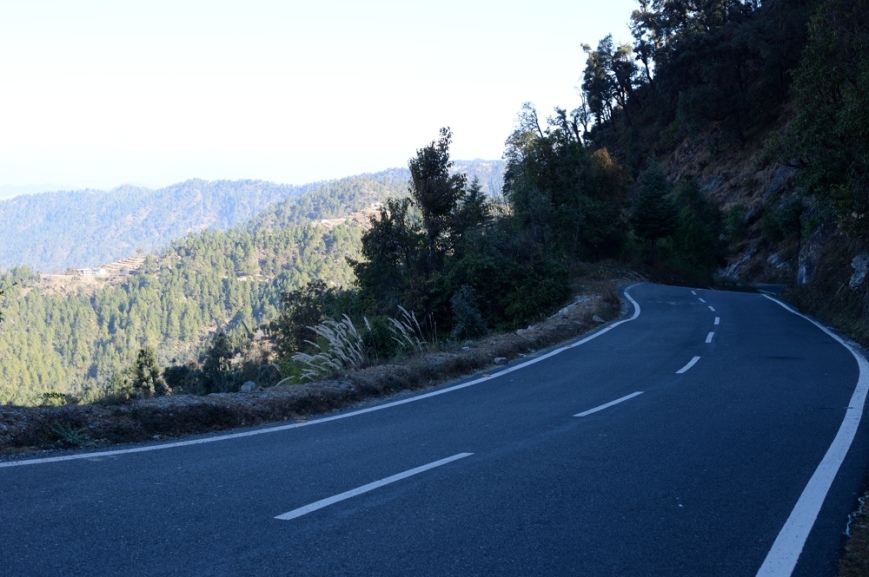 (This was captured as a raw file with 3D matrix metering mode and -1EV. Even with this setting, I was unable to get the Himalayan peaks in the photograph. Instead I ended up underexposing the road. The raw file was converted to jpg using Nikon’s converter without changing any settings)

HDR is a very simple application of the stacking function. Different images are captured of the same scene using different exposures. If the image above was exposed to -3EV, I would have got good details in the sky and the snow covered peaks. Similarly a +2EV exposure would have given me good details in the dark areas along the road. For achieving a high dynamic range (HDR) image, these photographs are then superimposed on top of each other. The details in the sky and hills are picked from the darker image and the details near the road are picked up from the image exposed for getting the details in these areas. This stacking can be easily done in various softwares (Photomatix Pro, EasyHDR, Aurora HDR, SNS-HDR and even HDR Efex Pro and with some efforts in Adobe Photoshop).

(This is the HDR photograph captured in the camera itself. The camera automatically captured multiple images and superimposed them on each other to get this photograph. The details in the hills are seen but the overall photograph is not what I wanted)

A quick peak at the preview screen did not impress me. It was time to actually get down to the basics and capture different images for creating the HDR.

I took all the above precautions and captured a series of three photographs. While I was capturing the images, a car appeared around the bend. I had to wait for sometime for it to pass. After it had passed, I captured the series again. Even slight delay in exposures can sometimes make the photograph look unnatural if there are slow moving elements in the photograph like clouds. After all, the HDR software superimposes the photographs on each other!

After running the images in a HDR software, I got an acceptable image with good details in shadow areas as well as the snow covered bright peaks. 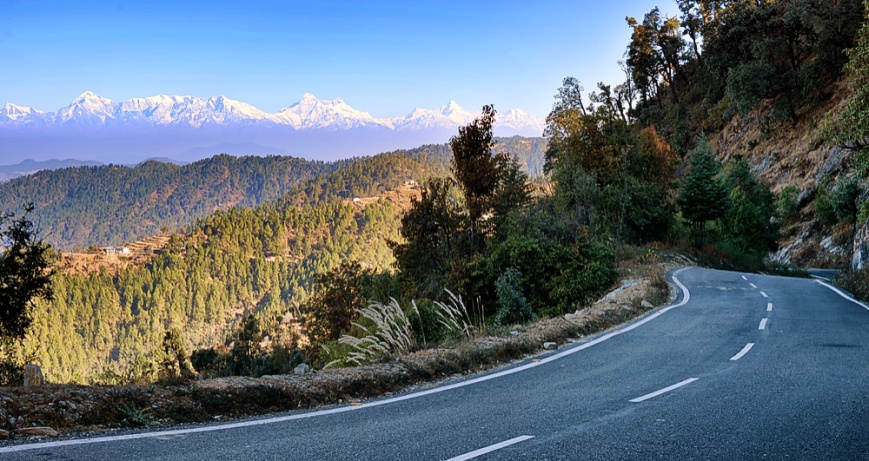 (The three images combined in the HDR software gave the above photograph. It was later processed to correct the colors and sharpness)

Another simple option in today’s world is to click raw and then recover the details in shadows and highlights during post-processing. This works fine as long as the details are not completely lost in the raw image. When properly post-processed, many stops of data can be recovered. With cameras that have sensors that exhibit ‘ISO invariance’, this can be accomplished even more easily. (See this link for ISO invariance – Raw files – what affects them)

There are however limitations to this method. Extremes of exposures can’t be handled even by good post-processing. Sometimes the areas, which have been boosted up to get the details from shadows or toned down to get details from highlights, end up having weird colors. The results might even look unnatural at times. Usually there is a loss of dynamic range too (opposite of what we are trying to achieve).

Another simple method to creating HDR from raw – Post-process and save three different variations of the same image (using exposure slider). Use these three images to create a single HDR, by stacking.

So, if you want the best exposures in your landscapes, try HDR. It is not as difficult as it sounds. Once you get the taste of HDR, I am sure that you won’t think of capturing any ‘normal’ landscape photographs for a long time.