You guessed it right. My trusted 50mm Nikkor fell down from a great height and broke beyond repairs. I was in the market for a new 50mm lens. With budget not a major constraint, I went all out and did a in-depth research on the various options available. There were a handful of lenses which had great reviews all around and were easily available for my camera. Some of them had very poor reviews or were not upto the mark. I did not even give them a second thought. After some research and asking around, I was limited to deciding between these models –

(Just a road – Tried my new standard prime. This is one of the all rounder lenses that I love to carry with me.)

This article is not a review of these lenses but just a summary of my impression and what I ended up purchasing at the end.

There were three versions of this lens available locally. The earlier D version was the smallest in size among the three and in fact, smaller than all the other lenses. The small size is due to the absence of built in auto-focus motor. After trying it out on my camera, I found the screw based AF quite fast. The aperture ring is an added advantage and so is the standard 52mm filter size which used to be quite common earlier. Next I tried the G versions. These are slightly larger in size due to the built in AF motor. The auto-focus is faster than the D version and very very quiet. I was impressed by the AF speed. The manual focus is not very smooth with any of these lenses. The special edition sports a silver colored ring instead of the distance window and looks similar to old Nikon lenses, except for the obvious absence of aperture ring.

This is the bigger brother of the f/1.8 lenses. The D version for this was not available at any of the shops in my region. The lens felt far better than the 1.8 version when mounted on my camera. Though it is more expensive and faster than the other one, the experts claim that this lens has lower sharpness and more distortion than the 1.8. I could not judge it simply by playing around with it in the shop. The difference if any should be minimal since I could not make out any difference between the photographs of the same scene clicked by both the versions.

This lens has lately won a lot of accolades and is highly rated. The art series has pushed Sigma into an altogether different strata of optical excellence. The lens is really sharp though quite large for a 50mm. My only gripe with Sigma lenses is that their focusing ring turns the other way round, compared to the conventional Nikon movement. This is good for Canon users but I happen to use Nikon. Sigma 50mm art lens is reviewed even better than Zeiss 50mm by many sites. However its workmanship, direction of focusing ring movement and the overall size helped me make up my mind against finalizing it. The Sigma does auto-focus which the Zeiss lenses don’t but still it did not convince me.

This is an old manual focus lens which is still manufactured and sold by Nikon. Among all the Nikon normal primes, this is the sharpest of the lot. To top it, the lens also has decent macro focusing capabilities. 55mm focal length is too less for comfortable macro use but close-focusing ability helps a lot in creating those photographs which look three dimensional. f/2.8 makes this lens the slowest of the lot. The shopkeeper was also not very comfortable in providing me with after-sales support for this Nikon lens so I was forced to drop this too from my list, though I was impressed by its sharpness.

When it comes to optics, Zeiss is one of the few names that commands respect. Zeiss lenses are some of the sharpest lenses available. Microcontrast is another of their strengths. When I went to the Zeiss dealer, he refused to let me mount it on my camera but showed me a similar lens attached to a Canon body which he had. I also did not insist on unpacking a new lens just for trying out. The first thing that caught my attention was its metallic body. It reeked of perfection all around. Sigma art lens though as expensive as the Zeiss lacked this perfection. The finesse and the workmanship on the Zeiss lens is ages ahead of Sigma art series. Manual focus was very smooth and dampened. A pleasure to play around with. I could make out a little bit of chromatic aberration especially when focusing on backlit objects. This however goes away on stopping down a little.

This is a underdog when it comes to lenses. Though an old name in photography, very few photographers know this company now a days, let alone use their lenses. Voigtlander is still in business and incidentally the current lot of lenses are being manufactured by the same Cosina factory that manufactures the Zeiss lenses. This is the fastest lens in the lot. I tried it on my camera and found it to be slightly softer than the Nikon lenses. The manual focus was as smooth as the Zeiss lenses and simply a pleasure to use. Though getting the subject in focus wide open required a conscious effort, the smooth focusing helped. Everything is fine with this lens apart from image quality and that is what the primary function of a lens is. This is a good lens to boast about f/1.1 aperture but the softness takes a toll on it.

This had the longest focal length of the lot. Quality wise, I found it better than the Nokton 50mm lens. This one was sharper and less expensive than the Voigtlander’s 50mm lens. Focusing was as smooth as the other Zeiss and Voigtlander lenses. 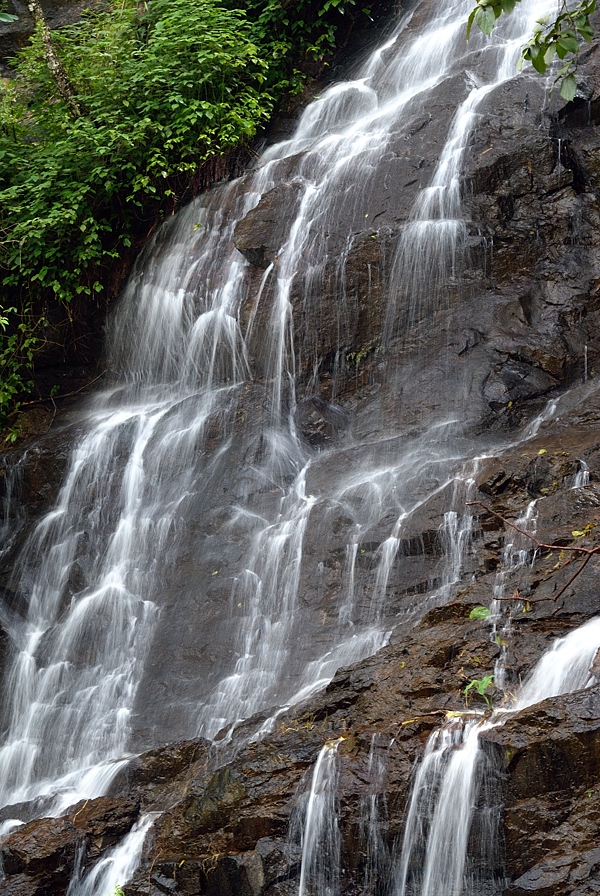 (A small waterfalls on a roadside in rainy season. Quite a common sight on the hills. Photographed with a 50mm lens on Nikon D200 camera)

Zeiss, Voigtlander and the Nikon micro lenses that I tried were manual focus only. Almost all the lenses that I presently use are manual focus. In fact, I have changed focusing screens in most of my camera bodies so as to incorporate a split-screen focusing aid and also a micro-prism collar. Glancing at the focus confirmation dot on the side of the frame is not too comfortable for my use. So the absence of auto-focus in these lenses was not a deal breaker for me. What I wanted was a sharp lens with good ergonomics. Though budget was not a big concern but still any money saved could go for my next purchase.

First, I tried reducing my options. The first ones to go out of the list were Voigtlander Nokton 50mm f/1.1,  Sigma 50mm art lens and the Nikon micro 55mm lens.

The remaining Nikons were a close call. The f/1.4 Nikkor was better built than the f/1.8 versions however from what photographers have told me, the f/1.8 is a better lens. Among the f/1.8 lenses available, G version had faster and quieter autofocusing than the D version. Presence of autofocus motor meant that I could use it even with my oldest and the least expensive DSLR. I therefore finalized the Nikkor 50mm f/1.8 G lens as my next standard prime. The special edition costs more for a simple silver ring but it seems to match my Nikon Df body. In fact, it is shipped as a kit lens with Nikon Df. It was foolish of me but I got attracted to the looks and paid a little more for the special edition lens. I do not recommend Special Edition version since the quality is same. I ended up paying more just for the looks but it does not impact the image quality in any way. Another thought that crossed my mind was the autofocus capability. Though I use manual focus most of the time, but if the company is providing me autofocus capabilities, why not use them once in a while? That is what I do especially on family outings.

Zeiss 50mm was a gem of a lens but the chromatic aberration was a pain even in slight contrasty scenes. If I was not going to be using the lens at its f/1.4 aperture to avoid this, what was the use of considering it? I agree that this was sharp with excellent microcontrast and the brand name says a lot, but the lens did not convince me.

Those of you who have been reading the article closely must have noticed that I have not mentioned anything about the Voigtlander 58mm f/1.4 lens. The reason was that by the time, I made up my mind, this lens was out of stock. In fact, this one topped my list and happens to be my favorite. The image quality appears to be better than the Nikkor 50mm lens and the 58mm focal length hits a sweet spot on my cameras with 35mm sensors. I have bought the Nikkor 50mm f/1.8 G lens (special edition) but I have also placed an order for the Voigtlander 58mm. The chances are slim that it’ll become available anytime soon but I am keeping my fingers crossed.

Zeiss 50mm makro planar f/2.0 – This lens always catches my attention but I could not find it at any of the shops in my region. I was not going to buy this, without trying it out and just by online reviews.

Schneider PC-TS 50mm Super Angulon f/2.8 – The perspective control option and the legendary sharpness attracts me to it but its price is prohibitive. What surprised me is that this lens is available in one of the small shops when I happened to search for it.

One thought on “50mm lens for Nikon”