On a visit to Kumaon hills, I came to know about Jageshwar, a group of old temples near the town of Almora. The temples are more than a thousand years old and surrounded by lush green forests of deodars and other coniferous trees. Away from the tourist map, the place is rarely visited by people. Only on some religious occasions do the locals gather up there. It sounded like a perfect destination for the photographer in me.

The very next day, I was on my way to Jageshwar. I enjoy hill drives. Apart from the beautiful scenery all around, the hills also enforce their discipline on the drivers. Anyone who has driven on the turns and twists of such hill roads can vouch for it. The journey was going to take around 3 hours while driving at a leisurely pace. I had started off early in the morning and so the breeze was still fresh and filled with the smell of the moist greenery around me. In contrast to Nainital, the hills in other regions in the Kumaon are green and they still have the character that enchanted Rudyard Kipling.

Early morning hours, when the sun is at an angle from the mountains, gives the best time period for photography. The slanting light brings out the textures and adds depth to the photographs of mountains. Sometimes, too much of contrast between shady trees and bright sun-shine can be difficult to capture on digital cameras. HDR mode can be useful provided there is no wind and the camera has a stable support. It was no surprise that I took around a dozen stops on my drive to the temples. Though every turn of the road presented me with beautiful landscapes to capture but I wanted to reach the temples too. Time somehow takes a very dynamic form on the hills. On a leisurely morning, the time comes to stand still and the day seems to last forever. One can savour each and every passing moment. However while driving down to the temples and trying to squeeze in some photography, the time seemed to be running fast. Before I knew, I had spend about two hours on the road, driving and clicking photographs, and yet I was not even half-way to the destination. When I come to think of it, my real destination was actually the photographs that I was capturing on the way. So, yes, in a way I had reached the destination but then I wanted to photograph the temples too.

(On way to the temples – Nikon D200. This was the only camera body that I had carried with me on this trip along with a wide angle zoom and a normal prime lens)

I drive a sedan. Sometimes I wish I had a convertible and I would have really enjoyed such drives. This thought was very short lived. Just a few minutes later, it started raining. It rained cats and dogs. It felt like as if I was driving under a waterfalls. I thanked my luck that I had a sedan with a hard roof over my head. My sedan had protected me and my photography equipment from the rains. My speed had dropped to a crawl but I did not dare to step out in the rain to photograph. The hills are always full of surprises. In a few more minutes and after a few kilometers, there was no sign of rain. The sun shone brightly. Once again I was ready to capture some more landscapes.

A beautiful landscape on my left forced me to take another stop. I stepped out, grabbed my camera with a wide-angle lens mounted on it, brought it close to my eyes and horrors! Everything in my camera seemed blurred. Everything was out of focus. I quickly turned the camera around and saw what had happened. The front of the lens and the filter mounted in front of it were fogged. The car was air-conditioned and the weather outside was cool (warm in comparison to inside of the car) and humid. Condensation had occurred on the filter and the lens. This is quite a common occurrence especially in tropical countries with high humidity. All I had to do was wait it out. In about 15 minutes the camera reached the surrounding temperatures and the condensation had disappeared. I clicked some beautiful pictures and once again I was back on the road. For those of you worried about such condensation happening, do not worry. It is normal. Just a piece of advice – do not wipe the surface. Waiting for the camera to reach the surrounding temperature is the only thing that helps.

I was just a few minutes away from the temples. On the side of the road was a mountain stream, which I later came to know, also had some religious importance. It was a wonderful sight to see the cascading water with surrounding green forests. The rocks too were covered will moss, speaking about the frequent rains in the region. Another stop would not matter since I was already near the temples. I placed my camera on a bean-bag, on top of a rock, to steady it. Motion blurs of water look very nice to me. I selected a slow shutter speed to have the required amount of motion blur and a small aperture to get whole of the image in focus. Just one shot was enough to get what I wanted, though I did take two photographs to play safe. This is another philosophy that I frequently stick to. I try to be like a sniper who prepares everything and then takes one shot and makes that shot count.

A few more minutes on the road and I could see the temples further ahead on the right side. The road was little high up than the temples or so it seemed. The town itself was composed of a handful of street-side shops, a few houses and a government guest house on the left side at a slightly higher elevation. I drove the car all the way to the parking in front of the guest house. The parking itself provided a beautiful view of the temples. On all the sides there were hills covered with deodar and pine forests.

(Door to an old house in Jageshwar)

The temples were all set up in close proximity to each other. One of the priests told me that the complex had over a hundred temples. The temple complex was deserted. There were no tourists, no pilgrims and not even another human being apart from a couple of priests. I could happily click photographs to my hearts content. Even though there was no one to supervise, there are a few unwritten rules that I always follow. I did not take any photographs inside any of the temples. Just behind the temple complex was a mountain stream. Was this the same stream that I had clicked photographs of earlier. I had no idea. All I knew that I was mesmerized by the beauty of the region and the austerity and quietness surrounding the temples.

The temples with their worn out rocks looked grand. There were narrow corridors, some scattered sculptures and even some large stone vessels to cook food. A few of the temples were still being used for religious purposes and these had some modern day additions like iron rails for controlling crowds, metal sheets as roof to provide some amount of protection from the rains and a few other common sightings in the temples, including the ubiquitous donations box. I am not a big fan of these additions and so I avoiding clicking photographs of these temples. After roaming around a little, I found an ascetic sitting in one corner who had just finished his prayers. I pointed my camera to him and his faint smile gave me the confidence to click his photographs. No words were spoken and just the faint sound of my camera clicking away filled the air. What more could a person like me ask for? I was at bliss. 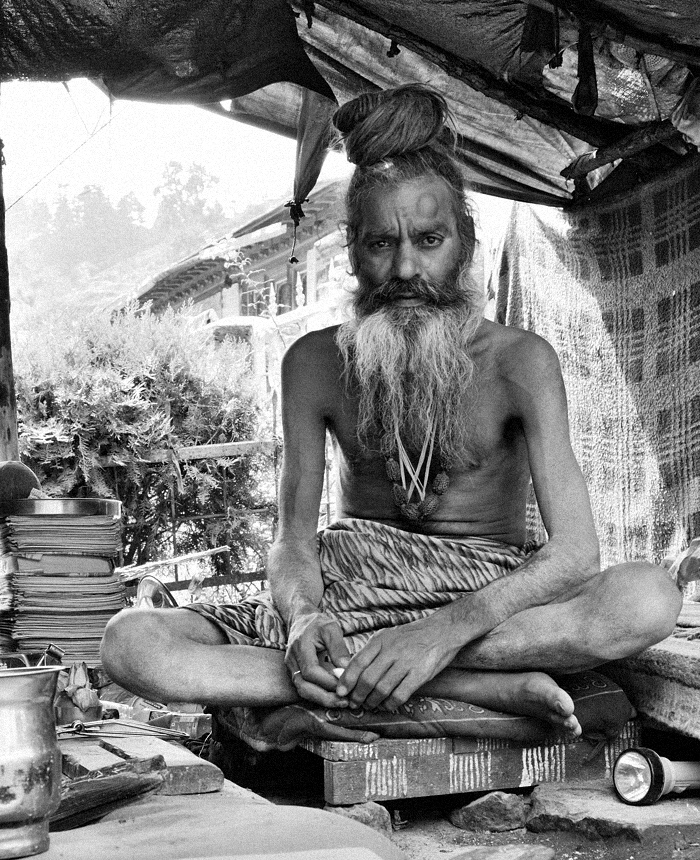 There was this wild variety of Marijuana growing behind the temple complex and all along the stream. That definitely was a sight. However as far as achieving inner peace goes, I prefer to stay away from it. For me photography provides enough happiness that I can safely ignore the likes of these. Now a pint of beer, well that is yet another matter! 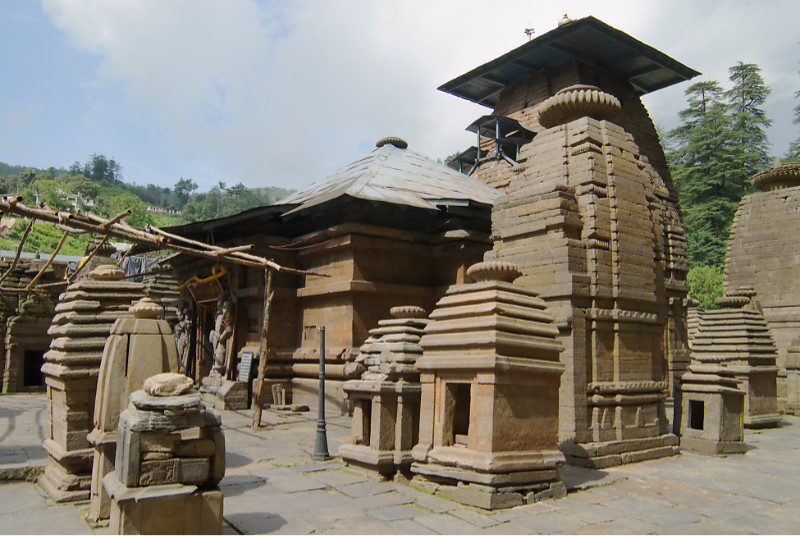 (One of the main temples at Jageshwar)

This is where I recommend staying at –
Maini’s Hill Cottages (The link opens in a new tab) – These belong to our family. If the drive interests you then do consider staying here. Another option is the tourist rest house very near to the temples, if you want to spend the night there.

One thought on “Trip to Jageshwar Temples”