“The Curves tool is the most sophisticated tool for changing the color, brightness, contrast or transparency of the active layer or a selection. While the Levels tool allows you to work on Shadows and Highlights, the Curves tool allows you to work on any tonal range.” This is the explanation given by GIMP and it says how powerful the Curves tool really is. It looks intimidating and so most photographers do not touch it but when used properly it is the single most useful tool.

Curves tool shows what the tonal values for a captured image are and what are being displayed. The tool window has some common components across various image editing programs –

The horizontal gradient: This is used to show the input or the captured image’s tonal range. It starts with the darkest value (pure black) to the lightest value (pure white)

The vertical gradient: This is similar to the horizontal gradient but shows the output values. Output is a fancy way of indicating the changed image after the curves tool has been used.

The chart area: This is where the ‘curves’ are actually plotted. Let us keep the terminology aside for sometimes and look into the chart area. This has a line going from lower-left corner to the upper right corner. This happens to be a straight line running diagonally since the output values are the same as that of input values. Some programs also plot a histogram in the background representing the tonal composition of the image.

Anchors (Control Points): The points where this line is fixed to the chart are called anchors or control points. The line is always anchored at either ends in all the programs (black point and white point), that I have come across. Clicking on the line anywhere creates another anchor at that point. All the anchors or control points can be moved within the chart area for the desired results.

The luminosity of various values (dark to light) can be changed by creating a new anchor on the diagonal line and then moving it. When an anchor is moved, the line moves as a whole between the adjoining anchors. This is to ensure that there are no unexpected results. Moving a range of values with an emphasis on a specific region gives natural-looking results.

Moving the anchor (and in the process the whole line) up changes the output of the selected values to lighter values. Moving it down, darkens. Once the line is moved up or down as a whole or in sections (using anchors), it becomes a curved line and so the name ‘Curves Tool’. The black and the white points are fixed so this method increases the brightness without blowing out highlights or darkens the image without losing details in dark areas. Mid-tones are considered to be the most important usually and this is where the adjustment happens. 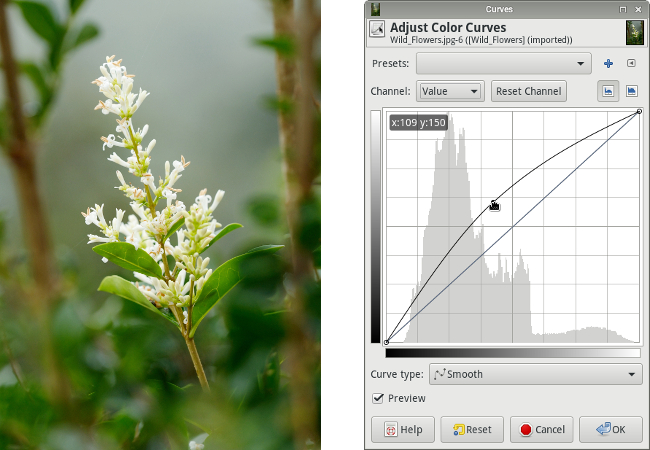 (The image above has turned brighter. The tonal value where the mouse is represents the output of 150 which was initially 109 to begin with. The values are given in the chart area on the top-left. X is the input or captured image’s tonal value and Y is for the output)

(The image above has turned darker. The tonal value where the mouse represents the output of 115 which was initially 148, to begin with.)

Brightening the dark areas and darkening the bright areas

Increasing or raising the left side of the curve (line) and decreasing or lowering the right side of the curve, will give an output where darker shades will appear lighter compared to the original file (input) and lighter shades will appear darker compared to the original file. This is also called the inverted-S shaped curve based on its appearance on the chart area.

(Notice the increased details in the shadow areas. The white flowers are reduced in their brightness. This is the Inverted ‘S’ Curve)

Darkening the dark areas and brightening the bright areas further

Doing the opposite will make the darker shades dark and the lighter shades light. This is called the S-shaped curve. This causes increased contrast. It is very easy to blow out the highlights with this so be extra careful.

(S-Shaped curve has helped in darkening the shadow areas further and the flowers are made brighter. An overall increase of contrast has happened)

(The lower half of the image corresponds to the changes made using the curves tool on the right. The upper half of the photograph is the original color. Channel Red was selected for this and the curve was raised to increase the amount of red color.)

Making use of the complete tonal range

Sometimes images may have empty areas at either ends of tonal values. This empty tonal range can be utilized by dragging the lowest or the highest end or both the ends inwards (to the nearest tonal value as seen in histogram overlay) can also help in stretching the tonal values across the available output values. This is similar to applying Ansel Adam’s zone system in post-processing. 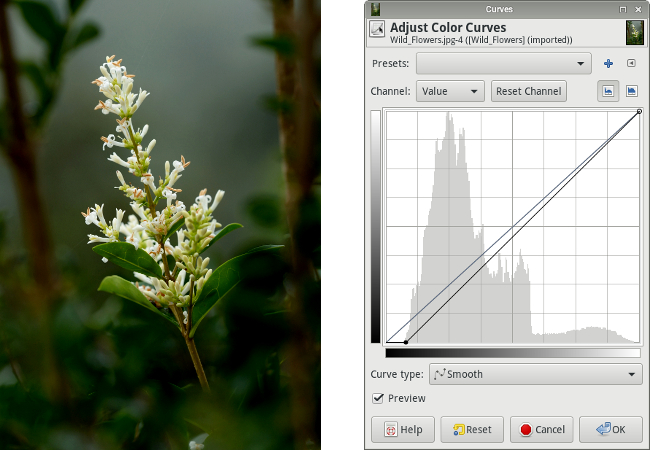 (There was unused tonal values near the dark point. Dragging the anchor corresponding to the dark point to the start of histograms helps in making use of this empty range. The darks become clearer with more separation in tones along with a perception of increased contrast.)

A word of precaution. Curves Tool is very powerful and small changes can make huge differences in the output. It is very easy to spoil the image too. Use it once you understand its working completely and keep the use to minimum. I recommend using this only on raw files or images with high bit size.

A lot of cameras have an option to emulate films. The pictures come out looking similar to how they would have looked on the corresponding film. Fuji Velvia with its contrast and saturated colors. Kodak Portra with warm hues, excellent shadow details and pleasing mid-tones. All these any many more film effects are now available in the cameras. Some cameras also have the option to load such custom film effects. There are software plugins available that make the photos look like the film selected. Yes, you have guessed it right… the main powerhouse behind all these film effects is the Curves tool. By careful manipulations, custom curves can be saved to emulate these films.

2 thoughts on “Curves Tool at your service”